One of 200 runners-up -- congratulations! 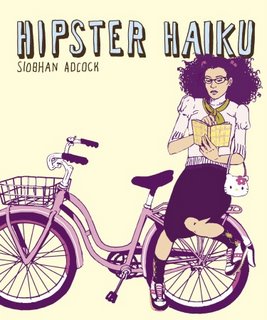 So remember that Hipster Haiku contest I posted about a couple weeks ago? (If you don't, the post is here.) Well I am a winner, of sorts, and my name is now going to be published in the book, aptly titled Hipster Haiku, which will be released in October 2006.

An excerpt from the good news email:

You’ve been selected as one of the 200 runners-up in the Hipster Haiku Contest! Over 800 haiku were submitted to the contest, and yours definitely stood out.

Finally, I have something to write home about.

I can see the conversation now:

-"I entered this contest. I'm a winner! (Of sorts.) Well, more like I'm a runners-up. One of two hundred. But I like to think about it this way: seventy-five percent of the people who entered, I'm better than. I'm in the top twenty-fifth percentile. Which is still good enough to get into many fine second-tier schools and universities across the nation. Like Clemson."

-"You need to work harder."

-"I know this will make you angry, but have you thought again about law school?"
at 1:16 PM

Jimby, this reminds me of the time I entered the Yale young poets contest. It wasn't THAT younger poets contest, but one for juniors in high school. I was one of the runners up, too. The letter was so patronizing- something about receiving so many poems that the stack towered taller than the tallest judge (golly!). I just remember freaking out because Paul Muldoon was one of the judges. Paul freaking Muldoon had read my shitty-ass poem! I didn't get published anywhere- but I was awarded a very nice literary map of Yale, which I hacked up and made the most glamorous collage.

And so, congratulations, darling! :-)

Great story, Benny. I don't even get a map. But I do get my name in print, so next time I'm hanging out in a bookstore with a lady, I can totally impress her by finding the book and then showing her my silly name in print.

OMG, SO typical of a Chinese parent!!!

GAHHH, wait till you hear about my latest family drama ... it's so depressing how little faith my family has in me to make my own decisions regarding my life.

Sigh. And you know what the worse part is? Chinese child guilt. We still feel guilty, even though we know our parents are insane and illogical ... we still have that twinge of guilt for living our own lives, pursuing our own dreams because we are not doing what they want us to. Why is that, James? Why???

P.S. Congrats, on being a runner-up. You're still numero uno in my book.

(yes, that was me attempting a haiku...very poor one at that)