---
Brooklyn indie publisher/record label/arts collective Swill Children is putting out a limited edition book of a story I recently wrote, called "9.16.10." The publication is part of a collaboration with my friend (and Swill Children founder) Jesse Hlebo.

On Saturday, November 6th, I will be at MOMA P.S. 1, in Long Island City, Queens, helping out at the Swill Children table, from 3-7pm.
A description of the day's events, from the Swill Children website (especially psyched to be a part of something that will feature Robert A. A. Lowe [a.k.a. Lichens], who, in addition to being an amazing musician is one of the former tenants of my apartment/loft):

Swill Children is proud to be participating in the NY Art Book Fair at MoMA PS1, November 5-7th, both as a tabler and an event organizer.

On November 6th, 2010 at 5:00pm, Swill Children will present Certain Distinctions, a multi-sensory performance based on gradiential structure. The fourty-nine minute aural and physical piece integrates improvised and composed movement and sound, all on the museums top steps. Certain Distinctions features five dancer’s assigned to five musician’s, who will progress as a group through the piece in a gradational manner.

---
I have a story out in the November issue of Abe's Penny, called "Brief Descriptions of People on Beach by Person Sitting Far Away." The story was written based on a series of beach photographs by the rad Italian photographer Massimo Vitali. Here is an example of his work: 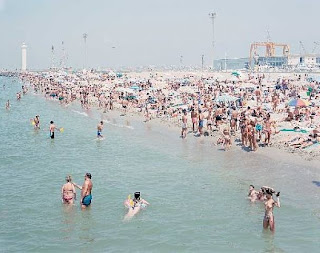 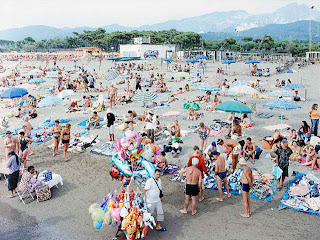