Accosted, then photographed for Time Out New York 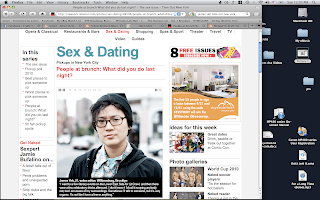 A few weeks ago, while waiting outside Diner to meet up with a few friends, I was approached by a woman saying she was doing a series for Time Out New York about "people at brunch." Today I decided to try to find that series.

I'm #24 in the series. I say a handful of boring/pretentious things I'd like to disown, including the words "celebratory" and "organic."

The interviewer, who came across as young, exuberant, and a little tone-deaf, had asked me if there was anyone at the bar that I was "scoping out." I spent the rest of the interview trying to explain my displeasure at that phrase, "scoping out." It sounds like what somebody would do at a club or something.

I mean, there were many interesting people there, some of whom I talked to and felt engaged and potentially attracted to, yes, of course. I can think of at least a few instances immediately (well, one). But no, there wasn't anybody I was "scoping out." Jesus.

The photographer seemed cool though. She took some pictures of me standing next to my bike that I thought I would probably like. But I don't think they ran them.
at 11:00 AM

Email ThisBlogThis!Share to TwitterShare to FacebookShare to Pinterest
Labels: embarrassing

my favorite part about this is the folder on your desktop labeled "ass videos."

The title of that folder is actually "Random Ass Videos," it's just the the "random" is partially cut off.