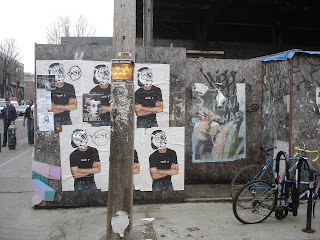 my steed (the one with the yellow handlebar tape, not the one without the wheel or seat)

i've fallen in love with my bike. i'm going to ride it everyday this week, to work, to everywhere. why? because i can. i think i'm going to even try to see if i can go without riding the subway at all.
this is my bike experiment and my journal of said experiment.
yesterday i went to the todd p nyc thing at fort tilden on rockaway beach. though i rode the subway there, i rode my bike the entire way back, which i guesstimated to be around 15 miles, if i didn't get lost. i got lost taking the wrong bike path twice and ended up in coney island, having to take bedford avenue the entire way to williamsburg. the reason i chose bedford avenue was because there was a bike path and because i live on bedford avenue. i think i rode bedford avenue for around 15 miles or so. i went through a lot of different neighborhoods, though the most memorable ones were brighton beach (i think) and bedstuy. brighton beach was like a nice jersey suburb and there were a lot of really buff dudes around and the sight of them made me laugh to myself. buff dudes are pretty funny, i think. i think it's funny to laugh at buff dudes. two of them were throwing a small blue ball to each other on the side walk. another was lumbering out of a car. the thing i remember about bedstuy were the two or three gigantic apartment buildings that seemed to house thousands of people. it reminded me of hotels at the beach in south carolina for some reason, i think it was the way they all seemed to have balconies and how some people living there had draped towels over them.

somewhere between bedstuy and carroll gardens i encountered about six or seven other bikers at a red light. one of the girl bikers said "hey" and one of the guy bikers said "BIKE GANG!" and then the light was green and we all floored it. i was the second faster rider going my way. all the lights were timed. i was going very fast. when i looked back everybody else had disappeared; gone separate directions or just left behind.

it took a long time to get back to my apartment and by then it was dark. all told the trip took around two hours. i hadn't been going very fast and because of that i didn't really feel tired; i think i could have gone for another 45 minutes or so probably, if i somewhere i really wanted to go. but i didn't. i calculated how many miles i rode back and came up with 18. including the 3 miles i had to ride to get there (the train did not go all the way to fort tilden and i rode the final stretch), that brings my total to 21 miles -- 22 if i include riding to meet my roommate for dinner. i wrote a facebook update about what i had done -- "rode about 22 miles today." two people commented. it made me feel like i had accomplished something, though small and fairly meaningless.
total riding time: around 3 hours
total distance (estimated): 22 miles
---
today i rode to work. when i got into manhattan it started to rain. hard. i was pretty wet by the time i got to work. after work i rode up to morningside heights to attend to some errands. again it started to rain. riding through midtown was intense. i thought about a mexican guy i had seen earlier who had almost gotten hit and who afterwards had stopped there for a few minutes with a serious look on his face. my rear tire was doing some funny stuff, pulling slightly to right. but it was fine. i made it uptown, no problem.

after my errands i hung out at lincoln's until around midnight, drinking a budweiser and talking about stupid shit. for some reason i decided i wanted to ride home. down columbus avenue, then broadway, through times square, union square, finally through the lower east side and onto the williamsburg bridge. unnoteworthy, save for a beautiful view of the partial moon, like a broken orange fingernail.

In scientific inquiry, an experiment (Latin: ex- periri, "to try out") is a method of investigating causal relationships among variables.

I ride bikes quite often also in Montreal. We have a new system installed where u can rent a bike at almost every block in DT and it is free for the first 30min if you have a membership. The best part is that you can park the bike at any station with an open space :)

man, i wish they'd have that kind of thing here, tang. are the bikes any good?

you know how i feel about this