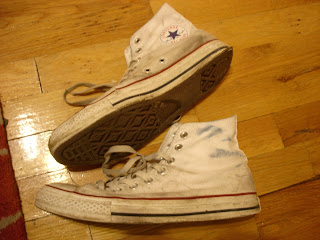 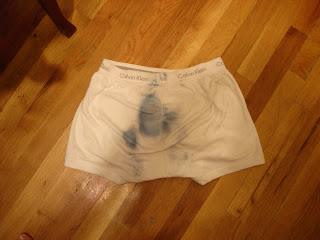 this morning while changing i discovered a strange sight. my underpants, which were white, had blue stains all over the ass. i'm not sure whether this is from my bike seat or my jeans, which are both black, but i'm pretty sure the rain is somehow to blame. i found similar blue stains on my white shoes a few days ago, so i think it might be the jeans, as the jeans were in contact with both the seat and my underpants.

riding to work today i realized how empty the bridge was yesterday. not that today was particularly crowded either though. there were maybe ten other riders i passed or was passed by and a few groups of orthodox jewish women taking their morning walks. for some they like to walk four or five across, without really yielding to traffic. it seems dangerous; i don't quite understand why they do that. the orthodox jewish men in my neighborhood have a similar disregard for what seems. they meander in the street, jaywalk in between parked cars, and generally exist in a way that requires you, the moving vehicle, to adapt to them. sort of admirable.

riding up 3rd avenue was hectic. trucks, taxis, fast drivers. it's true. sometimes as i ride i think about death. or rather, i think about what it would feel like to get sideswiped to a curb, or smack into the back of loading truck. i think about this while riding fairly constantly, though calmly. i imagine what my teeth would be doing, how my lips and mouth might contort. though morbid, i feel this is healthy, to consider one's mortality. we'll all die, someday.

i deliver these words from work, from my desk, located in what i refer to as "the basement."

an update from yesterday: milena informs me that google maps has a distance finding feature. it turns out i rode less than i had previously guesstimated, based on the "finger" method.

---
hopefully it won't rain too much so i can bike up to the new yorker softball game in central park and then down to chinatown. i'm a little worried, but i can manage.

Undergarments or underwear are clothes worn under other clothes, often next to the skin.

but what about underpants?