a blog from litcrawl nyc, i was interviewed briefly by poets and writers 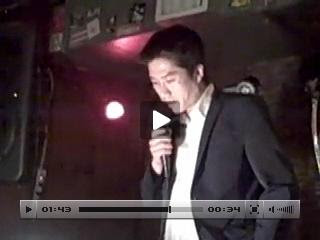 *(meant to post this last week, but forgot to)

organizer todd zuniga of opium magazine speaks first, followed by some people reenacting a dialogue between chuck close and someone else i can't remember, followed by tao lin's gigantic microreading about smoothies, followed by a brief interview with me, in which i am asked what "separates lit crawl from other literary events?" or something along those lines, and in which i answer, accordingly.

the gigantic reading itself was discussed in detail in the accompanying article by suzanne pettypiece, "lit crawl: a postcard from new york city."
at 10:54 AM

Opium is a narcotic formed from the latex released by lacerating (or "scoring") the immature seed pods of opium poppies (Papaver somniferum).

the blood of the writers and the beer of the bars ... well said

my word verification was "resti"