a blog from france, the particular blue of paris at night, "reverse-decadence" 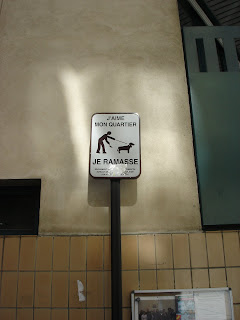 today i woke up at 6:30am or so and wrote/edited for two hours, made myself breakfast from food i bought at the market yesterday, was informed by my host that the louvre was only 15 minutes away, nodded at him some, wrote more, then took a four hour nap. after waking up i sent emails for a while, describing what i had just done as "wasting my time while traveling in a new place", a kind of "reverse-decadence".

after i ran out of emails to send i went to the bookstore shakespeare and company. along the way it occurred to me how much i enjoyed "wasting my time while traveling in a new place", i.e. sending emails and sleeping a lot and making my own meals, which is to say basically acting how i would act if i lived there. it felt liberating, in a way, to be feel enjoyment from this.

at shakespeare and co i was surprised to find gigantic at the very front of the store when you walk in, on a rack at the front counter, directly above the new yorker. i took a few pictures, then went upstairs and read a grace paley story my friend adam really likes, then went downstairs and talked to hilary, one of the employees there. hilary knew me from gigantic -- she was the one whom we (rozi) had written to originally. it was nice meeting her. she gave me some free stuff to give to friends back home (tonia and rozi). 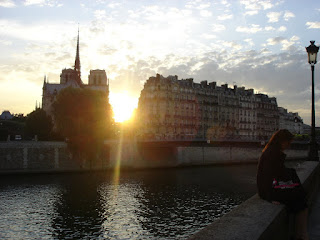 after hilary got off, her and her friend from high school matt and i walked around the seine. this was all very nice too. hilary and matt are originally from small towns in nova scotia -- "hamlets in nova scotia," was the term matt used, which apparently refers to towns with less than 100 residents. hilary and matt talked about how they were bussed in from all over to go to school and how it was sometimes -30 degrees outside.

we went back to shakespeare and co for a while and hung out in the "writer's studio" eating bread and camembert and drinking rosette. the writer's studio was part of an adjacent building next to the bookstore and housed a handful of iternarent kids, nicknamed "tumbleweeds". in exchange for housing, the tumbleweeds worked two hours a day and helped open and close the shop. the third requirement to being a tumbleweed was "to read one book a day". a lot of people kept coming in to use the bathroom because the studio had, i think, the only bathroom in the shop. the most memorable of these people was a nineteen or twenty year-old kid who went by the nickname "swedish tom" or "swedish tom oliver". swedish tom oliver was dressed like an american apparel employee (he was, in fact, an american apparel employee) and, after going through an amusing entymology of his nickname, energetically related stories of other tumbleweeds, one of whom had recently been arrested for streaking around notre dame on a lost bet. after a bit of this swedish tom oliver suddenly become sad about his pending departure from paris and he left abruptly, lamenting "everyone leaving" and it being "the end of everything" and we left not too long after this to meet up with one of the other employees, an i think irish poet named terry, who brought along french girl named nessa he had met earlier while working. nessa and terry were also nice. we all went to an outdoor bar, of which in paris there are many. at the outdoor bar i drank a chimay blue and ate a croque "madame", which was described to me as a "like a grilled cheese" and was the same as the croque "monsieur" except that the madame also had a fried egg on top of it. everything tasted pretty good and we sat there for a while before we had to go home. 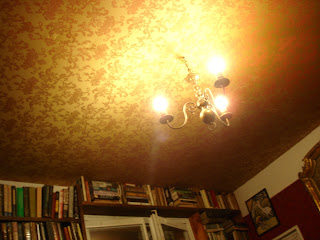 I did the exact same thing in Paris! Reverse-decadence. I refused to experience the city like a tourist when I was living there because I wanted to feel like a resident. It's a different kind of experience. You live your life. The writer's workshop sounds cool. Although your placement of quotation marks is like calling it a "ham" burger.

I love that bookstore. is there still a crazy old man working there who wears boxers over leggings?

@andrea l i liked your usage of the term "ham" burger

@lydia unfortunately, no, i did not see the boxers-wearer (almost wrote "boxes-wearer")