online lit mags, how we find when we find out about tom waits 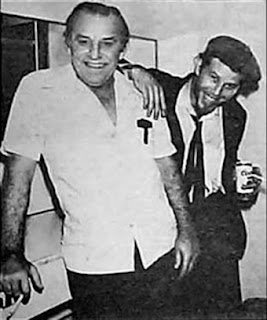 mike young has an epic and thought-provoking post on HTMLGIANT about the state on online lit journals and their supporters and submitters.

among the many points mike makes, the idea of finding out about shit through organic ways is one of them. among the comments is this great series, from sasha fletcher:

i read about frank stanford on i think blake’s blog.
some girl i liked gave me in watermelon sugar to read.
i learned about bukowski from reading about tom waits
i learned about tom waits because my dad hates the ramones and came into my room one day and took the cd out and put in mule variations and told me to “grow the fuck up”

i learned to love tom waits after years of talking shit about his music, i remember being in TGI friday's one night and saying to two of my friends who liked his music how i thought anyone who liked his music must be lying, because it sounded like someone rubbing two stones together inside his voice, now that is one of the things i most like about his voice, i think a lot of the things i really like now are things i used to talk shit about or hate for the same reasons

myself, i found tom waits through kazaa or limewire or bearshare or some shit like that my freshman year of college. i was doing a search of "polka" music to put on as a joke while i was out of the room. (i'm not really sure why, other than i think i imagined, then, that it would be funny to walk by a person's dorm room and hear polka blasting through the door and i wanted to provide this experience to others. also, i was kind of an ass.) i downloaded waits's "cemetary polka" to go along "beer barrel polka" and some other polka song i can't remember the name of. i set the three songs to repeat, turned the volume all the way up, and then locked my dorm room door and went out for a while. this all happened a few more times until it became clear nobody really cared what music i listened to or what i did at all and i stopped, because it just seemed sad to try to instigate with no response. seemed embarrassing, ineffectual, etc. it wasn't until years of shit-talking him later that i thought of tom waits as anything other than the creator of that awful noise i used to put on to piss people off.

what a shit i was.

but how great that music as weird as tom waits's is found by methods of equal weirdness.