Beckett for Prez, Lewis for Wife

The 2008 Election is currently scaring the bejeezus out of me, so here's something a bit lighter: Soho the Dog's Power Ballot, a collection of political campaign posters for more artistic tastes. 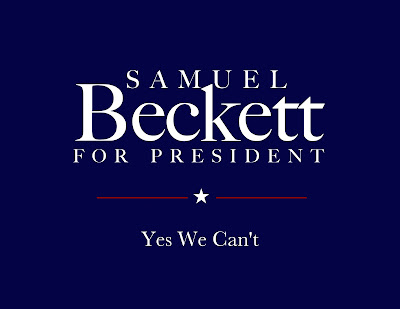 The other night I was lucky enough to get a chance to see a TV taping at the Apollo of "Spectacle", Elvis Costello's new talk and musical performance show to air on Sundance. Guests included Jakob Dylan, Jenny Lewis and She & Him (Zooey Deschanel and M. Ward).

Some things I noticed during the performance:

I don't want to admit it, but when Jenny Lewis mentioned Nathanael West, I fell a little in love with her. Am I really that shallow, to fall in love with a beautiful, talented and successful woman, just because she's read the same books as me?

This song will break your heart: