From Taiwan with love and petulance 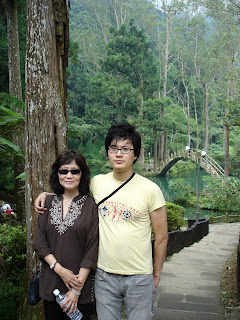 The past week I've been waiting for "Love Boat" to start, which is to say I've been mostly going insane from sharing a room -- and bed -- with my mother at my uncle's apartment in Taichung, the nation's third largest city. Have you ever shared a room with a parent, after having your own room for, well, ever? It's unbearable! -- as you can imagine. It doesn't help when it's 95 degrees outside everyday with 800% humidity and air conditioning in only one of the rooms in the apartment.

Example: last night after coming home late I received lectures from my mother, mother's brother, and mother's brother's wife. It was 12:30. Thirty minutes after midnight! If I hadn't returned by two am, they told me, they would have called the police. This isn't an exaggeration, and I believe they would have. Apparently, my uncle drove around to the nearby bars, looking for me but couldn't find me. I was one block away, at the coffee shop I told them I'd be at. In the morning, they each lectured me again. Yeah, yeah, they care for me, I'm lucky to have someone worry, etc. It's still ridiculous.

And yet, while writing this, I feel like I'm not making a very convincing argument that I'm the one to feel sorry for. I'm probably not. I mean, look. Twenty-five (twenty-six in a couple months) and here I am, in a beautiful foreign land, making the teenage angst face. The whole thing makes me sad. She's too old to change and I'm old enough to know better.

On a totally unrelated note, I have discovered some cool other stuff, including female Taiwanese indie rock bands, Nipples and Bad Daughter (such a great name, particularly in the context of Asian culture, really patriarchal and kind of anti-art).

Don't worry, James, it can take a really long time to be fully comfortable with your parents. And certainly you can't be at your pleasantest when you're with well meaning, overbearing relatives nonstop.

Well, my family makes me devolve into teenage angst worse than anyone. This week my mom sent me an email entitled "Pretty good article by Ann Coulter". So of course I launched an angry response to every ill-documented, patronizing, liberal-hating point and made my mom quite upset. It's a very strange power families have over you- and it is only stronger when you are the black sheep.

Also I got the journals you sent thank you very much! I will read them soon when I am being less lazy. For now, it is planning the move. And hey, I'll probably make road trips to nyec pretty frequently because ithaca is boring so we will hang out, yes? I need a writer to talk shop with sometimes and also a friend to have friendtimes with.

Good luck in Taiwan. I still think it's amazing you are getting to go there at all.

big american hugs (and texan, to boot, making them the biggest. of. all.)

thanks for the comments, you guys. you both really made my day.

meave, you can be my next therapist.

christina, your ann coulter story is amazing. your mother sounds like a hoot.

here's to hoping sf is not rainy and austin is not hot, although i'm sure they are currently both those things, as i can't imagine either place as otherwise.