Born in the USA, an update 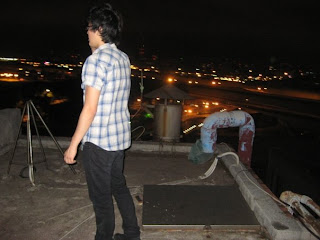 Back from Taiwan, trying to get my sleep schedule back on track, crashing on my friend's air mattress for one more day until I get my apartment back from my subletter. Tagging myself and friends on Facebook. Feeling very detached, very bored, very uninspired. The other night I found myself in the bar I've gone to for the last two years, yawning loudly as my friends talked about things I was no longer caught up on.

I would have done the same thing, had I been them, but I wasn't.

In Taiwan, everyday was learning experience, and if not a learning experience, at least a confusing one. I saw relatives I hadn't seen in fifteen years, drank almost every night, made out with a girl whose age I shouldn't mention (and sort of began to like her, or at least get jealous at her making out with other people. It's hard to tell with things like that). On top of everything, I was being injected daily with massive amounts of Chinese language, culture, and oddity. Now that I'm back, I feel like I'm being forced to repeat a lot of experiences I've already had. Getting a job, for example. Warding off post-graduate malaise. Lying to my parents about getting a job. Finding ways to waste my time that aren't really wasting my time. The list goes on.

In times like this, I usually turn to words. Words or drugs. I don't have any drugs, so words will have to suffice.

Some words I found not so boring or uninspired:

I regret to inform you that your biopsy confirms you have Stage IV lung cancer! Due to the lateness of detection, and your five decades of smoking high-tar unfiltered cigarettes, the cancer has already metastasized to adjacent tissue!

-At The New Yorker, The Wisdom of Children by Simon Rich.

DAD: (laughing) There are actual monsters in the world, but when my kids ask I pretend like there aren’t.

DAD: I’m angry, too! We’re angry at each other!

MOM: Now everything is fine.

MOM: There was a big sex.

-And finally, also at The New Yorker, some Bolano.

Sometimes I wouldn’t even go out shopping because I was scared of coming back and finding her dead, but as the days went by my fears gradually faded, and I realized (or perhaps conveniently convinced myself) that Clara wasn’t going to take her life; she wasn’t going to throw herself off the balcony of her apartment—she wasn’t going to do anything.