A night of pool and redneck revelry in Hagerstown, MD 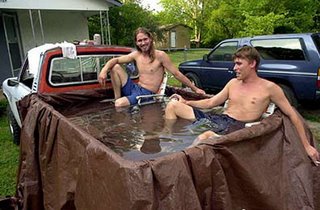 One of many creative uses for a pickup bed.

The trip from South Carolina to New York was fifteen hours (or so) and en route to the city my parents and I somehow we had ended up in Hagerstown, Maryland at the Clarion Hotel. It seems that this particular weekend wasn’t only the day the Yeh family arrived into town, but also a National TAP Pool Tournament, which is, apparently, a cross between Spring Break Cancun, Black Biker Week, and a Larry the Cable Guy show.

We got there at around 7pm and the parking lot was jam full already. We searched for a spot to park our truck -- we are known around my family’s circle as the only Chinese family with a big pick-up (a Chevy Silverado) -- we came across a group of people who were grilling out on a portable gas grill set up in the back of a truck. A couple of guys in black t-shirts with the sleeves cut off stood around tending the burgers and hot dogs. Five or six people of both genders, spanning in age three generations, reclined in folding lawn chairs that formed a semi-circle around the back of the truck. They were holding open cans of beer and, as if on cue, when my parents and I came around they all turned pink and sunburned and suspicious faces toward us. Where had we stumbled upon for the night? Hazzard County? Vicksburg before the fall of the Confederacy? A Hate, Not History rally?

After finally finding a place to park, my parents and I went in search for something to eat. The lot was, as I said before, quite crowded and my dad was reluctant to move the car.

“Besides," he added. "Why go anywhere else? There’s a restaurant here.”

And so this is how we ended up at Barefoot Bernie's, the sort of tacky tourist trap usually found in resort (i.e. trashy coastal) towns like Myrtle Beach, SC or Daytona, FL, places where thirteen year-olds who say they are eighteen-year olds lose their virginity to forty-year old bikers who say they are, well, I don't know what they say they are because I don't talk to them. Probably forty-year old bikers, for all I know -- I hear bikers are an integrous lot.

No, I'm not making any of this up.

Let me put it this way: this place was located in the middle of a hotel, which is to say, the kind of place that would have young children going around on any given day and the first thing you see when you walk in is a female pirate with a come-hither look and a ripped-open breech cloth shirt (if you could call it that) showing off two very globe-like breasts.

The meal was decent (I got a burger -- it took forty minutes before we got it -- what were they, slaughtering the cow?), however the overall experience was depressing, as expected. What came next was little better; after dinner my mother and I unloaded our truckbed of all our most valuable possessions and my father proceeded to the tournament room to watch Hagerstown's finest in action. As I brought in the last of our stuff back into the room, I passed by a group of teenagers standing in the hall, doing what teenagers do.

"You gotta do something about that hair," one of the guys said as I walked by.

To the derisive sound of laughter I slid the keycard in and went inside. It was one of those nights.
at 1:40 PM

Wow, you just described every trip my family and I have made to Myrtle Beach ever since I was young enough to know "hey, those people seem to enjoy Hank Williams Junior just a little too much!"

Fucking teenagers, with their fucking opinions...kill em all and let God sort em out, I say. Of course that might have something to do with the thirty-year sentence I got for running that schoolbus of children off the road one gray December morn.

While I appreciate your anecdote, please refrain from using the words "Hank Williams Junior" ever again on my blog. I get these notifications in my Gmail whenever someone comments and after your comment the link "Free Hank Williams CD Set - Art-Offer.com - Hank Williams 10 Disc Box Set. Complete Our Survey Now!" popped up in the box normally reserved for things like "Ask Yahoo" (which I do ask) and "Funny Quote of the Day" (which I do think is funny). You must be mistaken, sir, for I will not stand for this outrage!

No thank you and badnight,

oh man - i laughed out loud at this post.

should i expect to see a commercial on tv - "hipsters gone wild!"?

Brat, that reminds me -- did you read this article in the LA Times about the GGW creator? Craziness.

Trevor, the same thing came up again. Damn -- I was hoping it would be an movie soundtrack that used all those aforementioned musical greats. Maybe that new film, The Hank Williams Story: That Time Bocephus Went On a Double Date with Reba and James Taylor and Carly Simon to the John Mayer Show (How Romantic!) and They Ran into None Other than The Hoff, Who, Of Course, Was Hanging with His Main HomeBOYZ, Boyz 2 Men.

Or Snakes On a Plane.

That sounds exactly like what I think Hell is! Did the waiters/waitresses walk around carrying large pieces of butcher paper to make those "condom" looking dunce caps too?