And they rode on: sitting shotgun with Blood Meridian author Cormac McCarthy along California's Central Coast

Yesterday was a pretty amazing day. One of my best friends Kev and I took a roadtrip, marking the first time I'd been south of San Jose (about an hour away from SF) since moving to the city.

We drove down the famous Pacific Coast Highway to Monterey and then to Big Sur and, let me tell you, it wasn't any kind of letdown. The mountains were gorgeous, the waters azure, the heights dizzying.

At one lookout point, there were gusts of wind of up to sixy miles an hour or so. I felt like Anderson Cooper reporting from New Orleans and had to keep my legs alert. I even saw the car tremble a couple times from the fierceness of the winds.

At other lookout points, there were equally exciting sights. Writer Cormac McCarthy might have described one of those scenes as thus:

From where they stood they could see the sandy-colored cliff face towering to the east and the curving road south stretching out with ancient wooden fence-posts alongside. The land around gaping like a carrion wound and smell of summer at a high altitude and the wind howling in their ears as they stood grimly and nodded, squinting in the luminous midday sun. More mountains rising ahead, trees fluffy like green balls of cotton, and to the west fields of golden brush and sage and rocky dirt unto the urineyellow beach and the azure salt waters and bristling white caps of waves out unto the west and the sunlight skittering out unto infinity.

In short, it was the kind of land that made you believe in a god and I loved it.

The only real disappointment during the trip, other than the wish that everyday of life could be spent surrounded by such awe-inspiring scenary, was experienced by Kev at the Monterey Aquarium. On the program there is an exhibit called "Sharks: Myth and Mystery" and underneath it is a prominent picture of a great white shark. Unfortunately there was only myth and mystery, no sharks. We searched and searched, Kev even finally reduced to the emasculating action of asking the braces-wearing teenage girl working the information booth, and yet what did we find? A bunch of little five-foot long bottom-swimmers with black fins -- hardly what you think of when you hear the word "shark".

(To be fair, they had some little hammerheads too. Still.)

But enough with words, here're the pics that'll make you believe! 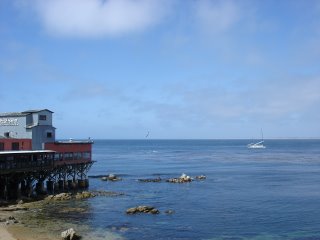 From the second floor of Louie Linguini's in downtown Monterrey. 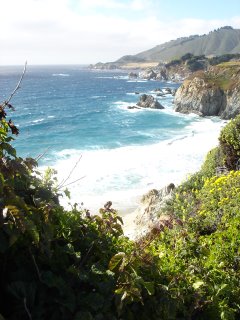 From one of the lookout points off PCH around Big Sur. 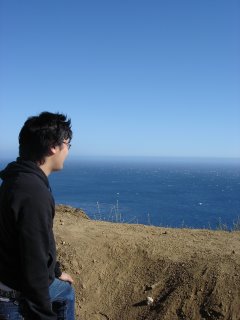 Looking to the future.

And a link to the rest: Other Central Coast pix. (Photo credit to Kevin Haynes for most of the better-looking ones.)
at 1:03 PM

Either way, your land is lurvley.

And Cormac McCarthy is not. Ix.

Of course I am, Benny. How can I go to NY without my mane? I'm like Samson, dontcha know.

Not a Cormac McCarthy fan, eh. I thought you of all people would enjoy the writerly stylings of McCarthy, or as I like to call him, "C-Mac". Hmph. Well your loss, I guess. :P

I'll take up pretty horses when you take up being a cat person.

I never read that one, B. But I have read the novels Child of God and Blood Meridian and they're so ridiculously good that make me sort of sick in that green with envy kind of good way.