Q: what do islands, sigur ros, john vanderslice, art brut, and cat power have in common?

A: they're all playing here while I'll be in Chicago and SC for my sister's wedding. dammit, sis--couldn't you have planned around me?

I wrote this sort of shitty article about the whole thing a couple months back called "The End of the World: Hippies and Hipsters Unite". If you're too lazy to click on it, basically I write that this whole thing is either going to be a gold mine or the worst mistake ever. I'm hoping for the former; people who support music get my support, as simple as that. But if it's the latter, I'm going to be the first one to say "Toldja so". Don't they know hipsters hate festivals? 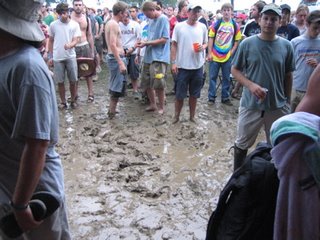 I LOVE your blog!!!!!! please go to mine and leave me a comment. www.arrow-world.blogspot.com

Jimby, I love your blog, too!

Are you more hipster or hippie?

You should write a Bonnaroo Quiz called "Hipster or Hippie: Where Will You Be When The Mud Starts Flying At Bonnaroo 2006?" And make Morning News post it. Not McSweeney's because then I'll never read it. Morning News, Jimby. Morning News.

Not a bad idea, babe! Thanks!

And to answer your question, waaaaay more hipster. No contest. I hate hippies. Can't stand 'em. Smell like patchouli.

I traded in my Birkenstocks for Chucks senior year of high school.

James,
Get your patchouli stink, OUTTA MY STORE!
Move it lard ass!

I love patchouli! All my Body Shop unscented stuff is full of their patchouli oil. Patchouli and sandalwood. Also, I feel more comfortable talking to crunch granola types. Hipsters kill me. James, you kill me.

Robb, what the hell are YOU supposed to be? Wait till James write the quiz to find out. James, write the quiz, post it on your blog, and we can all take it and leave our results.

I thought hipsters were those trousers that hung off a woman's lower hips.

Obviously there is more to the term hipsters than that. I'm so not au fait with the modern world.

Stripper, if you're just pretending to not be au fait, then you're totally a hipster.

If you're just generally clueless about the modern world, then you're totally romantic-hippie, buddy. ;-)

I don't know what I am J, but I am certainly not a hipster
E

Some reason you left BECK of of the fucking list of bands, James? Because, y'know, I'm really starting to doubt your hipster cred when you mention Tom Petty as a source of attraction and don't even mention the hipster God himself. A top spot in your "Best Albums of 2005" list and the man still can't get any 'spect!

Oops, Jenn! By the way, my Best Albums of 2005 needs some minor revising upon torrenting about fifty more of last years' albums. The top five or so stay the same, but changes elsewhere--like Andrew Bird moving on up, and the same with Stars.