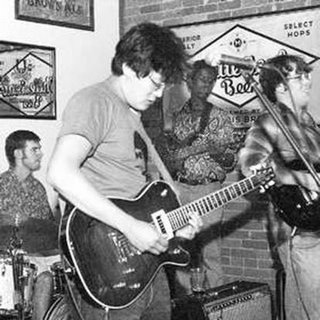 I had an audition with a local indie rock group this afternoon, so the past 24 hours have been spent scrambling to put together some semblance of a rig in preparation. Most of you probably don't know my musical resume; I've been playing out, which is to say professionally, since I was a senior in high school. In college I played in a jamband for around a year and a half. This project later turned into a folk-rock acoustic duo between myself and the guitarist. Everything was going pretty well; we had some local fans, we made a little cash, we got a little female attention (and by "little" I mean nearly none.) And I'm not just being modest--for two strapping young, talented, and humble musicians, we were pretty lousy at getting girls.

Anyways this all came to a halt last April when, after a particularly bad gig at our favorite bar (a sushi bar in downtown Clemson called Uptown Sushi), my bandmate and I decided (around 3 AM, at Waffle House--where all good decisions are made) to take a hiatus, which ended up becoming permanent.

That's the backstory. One of the many precursors to that final and disavowal of music was a festival the band played in Greenville where I left a substansial amount of equipment (around a thousand bucks' worth) all because of some complimentary chicken nuggets.

In my defense, I was hungry.

You see, if I hadn't stopped loading equipment for a McNugget break, the equipment (mostly effects pedals) would have been placed into the trunk of my car, instead of disgarded somewhere backstage for some random (and dishonest, I might add) person to pick them up and do whatever with them--probably use them to play death metal or something equally horrid, like popular country.

This was late 2004 to early 2005, and since then I still have not had the heart, wallet, or the desire to pick up new pedals--until yesterday.

Long story, short: I bought some new pedals and used them today. They sounded good enough and the band asked me back. I practice with the full band in a week or so.

Especially because you'll one day be a famous writer or musician (but please don't be both, or you'll be like Rick Moody- bleh) and when I'm a famous somethingeruther you'll attack my reputation and call me lousy.

There's a spider the color of my carpet wandering around and I lost it when I went to get some tissue to smash it up. Apparently, it knew what was coming.

Now go become a famous writer so I can use this as a blurb. Nevermind that your comment was about blog commenting and not actual writing persay--details like that are as useless as koala bears are cute.

Oh, I can do better than that if you ever want me to blurb you! I'll make you legendary. Your literary prowess will be tracked on bathroom stalls in coffee houses across the globe.

I am exploring the use of the Snowflake Method for outlining my next novel. It seems sensible enough. This waiting game is killing me softly. I need to hurry up and write another in case everyone says no to me. (And they will.) I can't believe it was almost exactly one year ago that I started the first one!

What's the Snowflake Method? Do tell. It sounds more fun than what I'm currently using, the James Yeh Method--which is hardly a method at all. Basically just a bunch of illegible pieces of paper and stuff that would be better off deleted to conserve hard drive space.

Oh who am I kidding--the James Yeh Method is fucking awesome.

So I'm guessing you haven't heard back about your novel yet. This is not a bad thing. They're just trying to figure out how much they should offer you. Two million up front or ten with interest.

Sigh. That's all I can say about writing right now. Sigh. The only good thing is that each day, I have new things to "get done" for someone with whom I've already been in contact in the industry. I am my own secretary.

I don't remember the site- but the Snowflake Method is some really geeky guy's approach to writing novels.

I don't remember how I found the link, but it turns out to be a very organized approach. I'm organized, anyway- I'm not a freestyler AT ALL. I map out everything and do the character summaries, so this seemed ideal. Plus, Mr. Snowflake is hot. Shiiiit.

Jimby, it's fucking hot in Tampa!

When you take up with the Japanese avant-garde artist that comes between you and your fellow barbershop quartet chums, always remember that...oh, wait. That was an episode of The Simpsons. That could never happen in real life, a band splitting up over a woman.

Benny, Mr. Snowflake sports a mustache most men only dream about. Interesting link--I might even try it out, although I'm more of what you'd call a "freestyler".

Trev, I just hope it's me that takes up with the artist and not Ring--er, the drummer.

hey, i vaguely recall being part of that modest female attention. and you know what? i feel pretty good about that.

As you should, Niki. As you should. I know I'll never forget that night we dressed up as Chuck Norrises (Norrisi?) and engaged in sweet, bearded loving.