Apologies for the lack of posting lately--office temping is a grueling process. I could tell you about my exciting week spent filing, entering data, and constantly checking my email, but I'll spare you the details. Just know it was repetitive and mindless. Repetitive and mindless, but paying.

Instead I'll tell you about my now official return to the rock 'n' roll profession. I had my second audition with the band Hybrid Kid today, and got the part of "lead guitarist".

The guys are also on MySpace as well--there are some mp3's from their recent EP up. The guys themselves are a bit older. Two of them are even married. I've never been in a band with married guys before, but I think I may grow like it--with half of the band tied to the ole ball 'n' chain, it's only between me and the drummer for groupie attention.

I mean, honestly, is there really anyone only in it for the music?

Kidding--I'm totally in it for just the music. And the fame. And the riches. And the "poon"...

And yes, I did just use the word "poon". 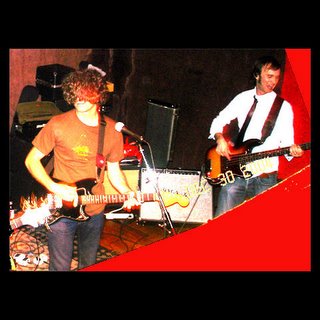 Wow. Nice.
Let me be the first (1st) to congratulate you. I'm actually really kinda stoked about this. Once you guys start playing NYC shows, I'm totally there.
Then maybe you can take my Taylor out for a spin, since it's been sitting in a corner since I moved up here. It's kind of an expensive form of wall decoration, I like to say. Although it is beautiful sitting there (it's a walnut), I really feel it should be played for other people than my wife and my dog.

You've had that guitar for a long time, eh? For some reason I have a very vague memory of seeing something like that in your possession back when we were in high school and simmering with a mild jealousy.

You gonna blog about your trip, or are you waiting until you get to work to do it?

I know. Seriously, Robb. Post some motherfucking photos. (I haven't been over there, yet. Maybe you already have.)

J-by, this is really cool- if only because it adds another demension to your posts. Just don't let your posts turn into long lists of dates and cities, dates and cities. And J-by, don't sleep with crackwhores.

Are you going to be playing Wilco songs, by any chance?

LOL, Benny. Glad to see you support my artistic endeavors, if only for your further amusement.

No Wilco planned, as of yet. But thanks for the idea...

You know what kind of music gets no respect these days? Old-timey tunes from vaudeville, that's what! But of course, vaudeville's dead, you see! Nobody pays good money to see a tumbler take a fall to a wisty old piano number, you see!

Vaudeville's on the way out!

I'm sorry, I'm making no sense (as usual) and ripping off "Family Guy" as well.

Congratulations! Way to not tell me at lunch today.

Meave, I was saving that information with which to impress you later.