Shambling down the alleys of a lovesick and restless America

So I caved in and got an iPod video - my first iPod ever. It's black, 30GB, and awesome. Seriously. It can do things like impress my friends, seduce women, or play music videos, movies, or TV shows on its tiny little color screen. It can hold an estimated 600 CDs all the while telling off-color jokes that make you laugh uncomfortably. It does it all. Thin and simple and elegant, it's pretty much faboo - even despite the fact that I've discovered several ways to crash its rather oversimplified interface. Like plugging it up to download songs while its playing something. It froze up and wouldn't even turn off. Yeah, that one took about fifteen minutes of frantic button pushing leading to owner's manual reading for me to it all figure out.

In other news, today may mark the return of Kevin Haynes to the blog scene. Writer of fiction, digger of graves, and hater of Lake Charles, Louisiana, Kevin is a great friend and an even better foosball player. While admitting his desire to do so, Kevin has not posted in months, and this will hopefully force him. Either that or make me a liar.

Either way, Kevin is in town visiting his older brother in San Mateo (about twenty mins outside the city), and the last two days we've been taking in/on the City by the Bay like Kerouac and Cassady, but without whatever homoerotic innuendoes that might imply. Last night's adventures consisted of a bar in the Inner Sunset District, followed by a walk around the Cliffhouse. Tonight we went out to Pier 39 (home of belching and barking sea lions), Fisherman's Wharf (across from Alcatraz and the Golden Gate), Lombard Street (the crookedest road in the world), and ended up in North Beach. It was there we came across a wonderful little bar called Vesuvio next to City Lights bookstore at the corner of Columbus Avenue and a side-street called Jack Keroauc Alder. The bar's absoultely great. Pictures of Beat Generation writers hang everywhere, jazz music plays on the radio, and in the various nooks and crannies, conversation takes place. Large glass windows allow you to look out into the cityscape and witty quotes sit above the bottles of liquor behind the bar, urging you to indulge. One can even choose to sit up in the balcony, taking in the entirety of the scene.

Kevin and I ordered drinks at the bar and wondered aloud if Kerouac himself had been there before. We tilted them back and agreed that he probably had. He probably had.

My time at Vesuvio marks the first night in San Francisco in the two and a half months here where I've had a "moment" - one of those times when you feel there's nothing better than being alive right here and now, where you are. It was nice and warm and tingly, like standing next to a fireplace or taking a shot of cheap vodka. Ah, AristocratGordonZemkoff, how I adore thee. 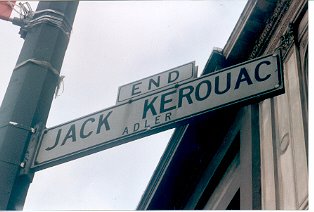 I tried reading On The Road years ago, but never got into it much. I've read most of William Burroughs' Junkie, but that's the extent of my Beat appreciation.

That, and various references to Neal Cassady on MST3K

On the Road's one of those few great books I fell in love with a couple years ago and am still in love with. I generally go for a slightly more minimalist aestethic, but with that book, it's perfect.

What the heck is MST3K?

Mystery Science Theater 3000...the best show about a human and two robots watching bad movies and making fun of them ever made.

I don't think I've ever laughed as hard in my life as when I've been watching Mystery Science Theater 3000. When someone in my family is driving all crazy, we say, "Keep those hands at 10 and 2, Manos."

And speaking of crazy driving, I liked this post. My uncle is Neal Cassady incarnate, so I have a special fondness. I always felt bad for Cassady when one of the other Beat writers had him talking about writing some of his own stuff, but not having the patience or intelligence to do it. I'm not really a fan of most of the junk that came out of that circle, but any portrayal of Neal Cassady gives me the warm fuzzies.

Your post is infectious, J-by! Go tell it on the mountain...

Thanks for the support, Brooklyn. It's nicely timed to counter the first serious criticism I've received (to my face) since the advent of my blog. It hurt so much I'm tempted to write my own anonymous comments lambasting my blog in ways so harsh that my extensive and loyal readership - you, Trevor, and maybe one or two people I went to high school with - will be forced to rise to the occasion and defend me, as a knight defends a maiden.

I'm so jealous my Kerouac-ian friend... oh and if you are looking for an extremely cheap vodka, I recommend Kamchatka. It goes down relatively smooth and mixes well with any tonic, but lets face it, the biggest perk is that it's simply fun to say.
-alden

Right you are, Alden.

Hope things are going well for you. You should come visit!

Any way, I'm here to defend. Let's hunt the mothertrucker down. I will give him/her my most lethal...

I mean, I'll defend. But I have to be honest: I'm as literarily scrawny as I am physically scrawny. So I won't add much to your blog-army (blarmy?). But I do know ALL of the curse words...

And Robb, blarmy is a great word. But I'm warning you - I'm about as good of an literary general as I was as a baseball player. Which is to say not very. I got cut from the JV team, allowing me the time to get into artsy stuff like playing guitar, which then led me into even more artsy stuff like writing and blogging. Well, not directly. But still.

The point is I'm still bitter. I could have been a contender!