My cousin and roommate, Raymond Li, is an IT (Information/Technology?) guy. This means he fixes computers and network problems for a living. This also means he gives me the hook-up to a bunch of internet and computer stuff I would not normally have the knowledge nor time to find. And because I like to share, here are a couple things he's told me about that could prove useful to you - they're hella useful to me.

File Downloading from www.bittorrent.com.
This website is much faster than what I had been using, Limewire. I've only had it two days, but I'm sold on it already. Quicker downloads and entire albums available - even some just recently released and in advance(!) This is how I can afford to be an up-to-date music snob. And if you take this to mean I'm stealing, you'd wrong. I won't go into it any further, but you'd be wrong.

Deals on Electronics from www.woot.com.
One deal on a piece of technology a day. Hadn't really used this much (okay at all), but if you're into this sort of thing, I imagine it'd be great. My two cousins (who are both IT guys) swear by it. Sidenote: in addition to standing for "we own the other team", "woot" has another definition (which I cannot currently recall) that originates from Dungeons and Dragons, or something similarly dorky.

Diesel Jeans from www.topeurostyle.com.
Okay, if you're not into designer jeans, read no further. Hell, I'm not really into them, but I do like jeans that fit well. And I know a good deal when I see one. Something selling for a quarter of the retail price qualifies as this. These are jeans that normally go for $200-250. Here they are onsale on this site for roughly $60. But I got mine for $43, WITH SHIPPING. When considering this situation, it might appear to be the sketchier than that really tall broad-shouldered hooker with the Adam's apple - in addition to the extremely low price, the jeans ship from Bulgaria, yes, Bulgaria. I don't even know where the hell that is - Eastern Europe? Still, I can attest to them and so can my former roommate, now med student at MUSC, Evan Baird, the source of this link. I should also add that Evan's mom has some interesting ideas as to how the jeans can be offered at such a price. Ideas involving shipyards and the mob. As I said before, eeenteresting. 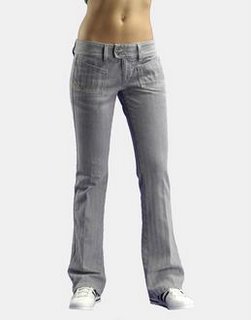 Are these the jeans James bought?

Where's the useful link from your IT cousin to give us out-of-work IT guys IT work?
If those are your jeans I hope you forsook the belly-baring cutoff t-shirt.

J-by, you could definitely play the maiden in these jeans. In case you had any doubts.

*While tapping fingers together and grinning sinisterly*

You aren't allowed to be a San Francisco hipster without at least one pair of tight, tiny girl's jeans. Way to fit in, dude.

hey jigga, came came across your blog and posted a comment under the best albums of 05 entry.