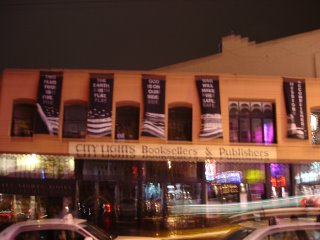 Here's the famous City Lights Bookstore. I apologize for the blurriness--I don't really know how to take pictures with this camera at night. Notice, if you can, the banners they've draped from the roof. "Two plus two equals five." "The earth is flat." "God is on our side." "War will make us safe." "Mission Accomplished." I got a good chuckle out of that.

Speaking of left-wing things, I made a huge mistake around two or three months ago by signing up saying I'd support a left-wing Political Action Committee (PAC) led by a guy named Lyndon Larouche (rhymes wth douche). As you might already know I lean moderately liberal, involving myself in things like a progressive college newspaper called The Clemson Forum (yes there are a handful liberals in Upstate South Carolina) and, while I'm mostly indifferent/horribly disillusioned by politics in general, there are certain times when I step into the fray.

Like, for some reason, two or three months ago.

The group didn't seem so extreme when I first talked to them while I was walking downtown on Market, but the guy who keeps calling me is relentless. Saturday night, around 8 PM, he informed me of a speech Larouche gave in Washington calling for the impeachment of Cheney. During the conference Larouche compared the current administration to the Nazi regime, furthermore comparing the American public to the "dumb Germans who allowed Hitler to gain power and then sat around thinking they didn't like Hitler but were just going vote him out in the next election."

He added, "There was no next election."

I responded that I thought his whole comparison was a bit of a stretch. In case you didn't know, this was probably the worst thing I could have said in response.

"Well this is the TRUTH!"

The problem was I gave them my cell phone number, like an idiot. I've since received nearly ten calls from them. After accidentally answering the first one, I saved the number with my caller ID as "DONT ANSWER" and because of it, was able to escape the next four calls or so. But the sly bastards came up with a way around it: a different number with a different area code. And I fell for it. They called again today (during the afternoon this time), but I didn't pick up. I'm very tempted to answer and explain that I'm actually now a card-carrying member of the NRA and that yes, legal action should be taken concerning Bush and Cheney, but that action shouldn't be removal--rather, it should be extension. That's right, Bush/Cheney in 2008.

But I probably won't. Unless they call me from yet another phone number.
at 2:24 AM

C'mon dude!
Get excited about the cause!
The cause, by the way, is getting funky.