Encounters with strangers in bars

Last night was another night spent writing and revising at Vesuvio. I think I made some decent progress in the novel, and I was pretty pleased with that. I also sat next to a really cool Midwestern couple who now lived in Manhattan and were in town on business.

A bit of San Francisco bar culture: At least in the North Beach area, there are girls called Peachy's Puffs who dress in 20's era bustiers, short skirts, and fishnet stockings and go from bar to bar selling cigarettes, candy, and various other sundries like silk roses. Anyway, one of these girls came into Vesuvio and the guy, Sean, asked the Peachy Puff girl if they sold individual cigarettes. After hearing that, I knew we'd get along. I was thinking the same question, yet didn't have the courage to ask. And while the answer was no, I came up with the idea of us going in half and half-a not too undesirable compromise. Sean and his girlfriend, Abby, and I proceded to spend the next hour or two sharing our opinions on the merits of Wilco, Broken Social Scene, and Wolf Parade. They eventually had to leave, but we traded correspondence info with vows to remain in contact. Well, Becky, it's official: Pretentious indie rock does brings the world closer together.

Later on in the night, a random older lady with brown teeth saw me working on my manuscript and asked if I'd read her a passage. There was no way in hell that I'd do that, but since she asked, I felt obligated to relent and so I handed her the first two pages. As she read it aloud to the other people sitting at her table, I frowned and buried my head in my thoughts and my beer. Her verdict:

And that's why I'm no longer sharing my work with strangers at a bar.

Coming soon: My adventures (and pictures!) of my hike through the Sutro Baths and Point Lobos-featuring death-defying cliff climbs, breathtaking views, and more! 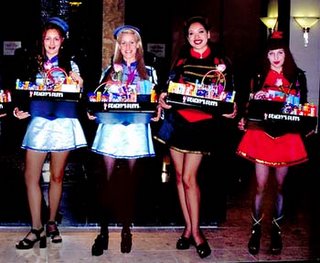 You liked the guy asking for single cigarettes; I liked the part about the old lady telling you to work on your meter. I mean, meter can lead to serious risks for your unborn children, but cigarettes kill you dead.

I wish I could pay Denis Johnson enough to instruct right out of my apartment. I don't remember thinking much of the two novels I tried to read, but Jesus' Son is lovely stuff.

Okay, since you replied to my myspace comment in my livejournal, I will reply to your LJ comment in your blog. Next step, barring creepiness: text messages. I love communication technology more than anything. Well, except when I am staring at my phone wondering why no one who isn't directly related to me ever calls me. Not funny.

I was actually visiting a friend who lives on upper Haight last Friday, and I might come back down next Friday, but that's not definite yet. If you promise not be a date rapist and I promise not to boil your pets, I think we should totally hang out. Note the use of an adverb to distance myself from the strength of the suggestion, the idea of which makes me kind of nervous.

Hey, to each his own. Snobby stuff can be okay. If it's, you know, cool.