It's the year's end and I have a blog. Because of these two facts, I must do one thing: make an end of the year "best of" list.

For the reasons that I am A) shamefully, frighteningly under-read for someone currently applying to MFA writing programs, B) pretty much living under a rock when it comes to going out to see movies or watching TV, and C) too poor to get enough new albums from all the other music genres out there, I've chosen to do it on albums. Rock albums.

Here is my podium and here is my microphone.

One man's list of notables: (Artist, title, rating out of five) 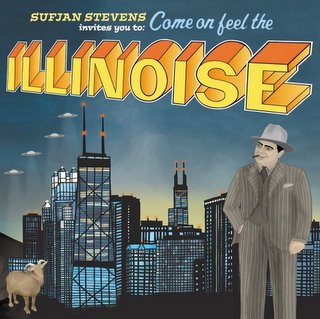 1. Sufjan Stevens - Illinoise 5
This album contains music with elements of folk, indie rock, orchestral, and classical using as instrumentation everything from banjo, guitar, and piano to flute, strings, and horns. Oh yeah, and did I mention he brings elements of experimental contemporary short fiction and Christianity into it all? Simply put, the most impressively ambitious (and executed) album of the year. 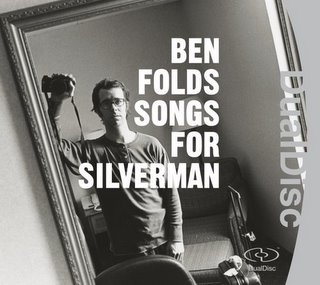 2. Ben Folds - Songs for Silverman 5
A truly heartbreakingly great album. Folds is, in my opinion, truly one of the best (and understated) songwriters of our generation. Maybe the best. A little inspiring while at the same time depressing, like all good music is. 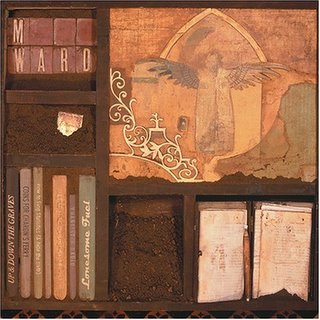 3. M. Ward - Transistor Radio 5
Fantastic album from a fantastic artist. If there were videos made to this music, everything would be in sepia, like an old photograph. I absolutely loved this beautifully subtle album. The songwriting is simple, amazing, simply amazing, amazingly simple.

The Rest of the Top Ten:

4. Fiona Apple - Extraordinary Machine 5
A heartbreakingly great album as well, and a great story of how it finally came out. I didn't think it'd be better than the leaked copy featuring Jon Brion as producer, but it's pretty much equal to it. A little less ambitious than Brion's, but because of that, a little more consistent.

5. Bright Eyes - I'm Wide Awake, It's Morning 5
Many a car drive listening to this album screaming and crying to the lyrics. Oberst's vocals can be a repetitive due to his lack of range; still, the songwriting makes up for it.

6. Stars - Set Yourself on Fire 5
I loved this album. It's everything good indie rock with elements of electronica should be.

7. The Decemberists - Picaresque 4.5
A fantastic album, but i just always feel The Decemberists could do a little more. I get bored at times with their oh-so-standard and somewhat lackluster song structures.

8. Broken Social Scene - Broken Social Scene 4.5
A few average songs keep this from a full out 5. These guys rock hard - refer to my previous post about going to their concert with Feist. This is a band to watch-they are ambitious, idealist, and able to back it up.

10. Beck - Guero 4
Great album. Essentially the sequel to "odelay". A few not-so-strong songs like the single "E-Pro" keep it from higher. Why was this the release and not "Que Onda Guero" or "Girl"?

Of Montreal- The Sunlandic Twins 4
Great, but with a few weak spots. Read my review here: Amazon .com review

Dangerdoom (MF Doom and Danger Mouse) - The Mouse and The Mask 4
Not rock, but it's new and I own it so I'm reviewing it. Hot beats and funny themes, but a little too ridiculous at times.

Bright eyes - Digital Ash 4
Would be rated higher up if not for the other full-length album he released this year. Only negatives are his voice and the fact some of the songs sound a little similar after a couple listens.

Keren Ann - Nolita 4
She's absolutely great, but for some reason there are points on the album that I feel are just not so strong.

U2 - How to Dismantle an Atomic Bomb 3
Bono and lads are solid and rocking and still fresh after all these years. Nothing you absolutely have to hear on the album though.

The New Pornographers - Twin Cinema 3
Good, but not too much depth after initial listen.

Archer Prewitt - Wilderness (somewhere between 3 and 4.5)
Haven't gotten enough listens in to really give it a definite rating - but pretty solid so far.

Jamie Lidell - Multiply 3
A few truly great songs ("Multiply" and "What's the use"), a few truly awful; and a few in between.

The Mars Volta- Frances the Mute 2.5
I've always been lukewarm toward this band, like going to the prom with your best friend. Good songs when they chill the fuck out, but I must say not a fan of the heavy metal, double-bass pedal, technical as hell, band geek drumming.

And finally, in a move most grandoise and pompous:
Stuff I Don't Own in Entirely, But Have Listened to Mostly and Still Want to Give My Two Bits Concerning

Haha- you called yourself a snob!

Your list is a nice mix of the accessible and the arcane. I think one of the few items on which we can agree is My Morning Jacket. My love for them is written all over .blogspot.com, so there's no need to go into it here.

PS- I forgot to say:

That's what I do. Accessibly arcane.

We have similar taste in music, it seems. I think you have more patience with The Mars Volta, though. What are your feelings on Wolf Parade? And the new Walkmen? And don't you think British Sea Power is roughly a thousand times better than Coldplay (whose songs do indeed sound identical)?

Meave, I can appreciate the quiet parts of The Mars Volta, but I feel that they're quite overrated. Wolf Parade I haven't delved into much yet, however, from what I hear I'm not really impressed. I'll download some Walkmen and BSP and let you know what I think.

"Girl" has been released. Unfortunately it wasn't the first release.

X&Y in the top ten? Really, I'm surprised. "Clocks" with different lyrics, but nowhere near the soaring heights that single reached. I put "X&Y" quite a few notches below "A Rush of Blood to the Head".

Please suggest some substitute(s) for that album, Jenn. Or better yet, post your own top ten on LJ.

I like the Coldplay album, but I don't *love* it. It's extremely consistent though. There aren't any clunkers. However, this could just be because there aren't any mindblowers either.

I just kind of up there because I haven't heard that much outstanding and (consistently good throughout the album) music this year. I guess I'm missing some required listening like Wolf Parade and My Morning Jacket's "Z" - (downloading it from iTunes as we speak). I also forgot the Modest Mouse album came out this year as well. It gets a three and one half, mostly because the middle of the album is pretty much unlistenable noise.

Boards of Canada: The Campfire Headphase!

Oh wait, this is rock albums. Hmmm, I think it can be argues that either of those are rock albums. But maybe not.

Wait, I've got it. The Go! Team: Thunder, Lightning, Strike is really incredible.

Iron & Wine put out some good stuff this year too, both alone and with Calexico.

Wow, despite many people's claims to the contrary, there has been a lot of good music this year.

That Modest Mouse album came out this year? Wow. 3 1/2 out of four? Or five? Yeah, I think it's really damn good. Much better than X&Y. Sorry, just can't accept putting such a... pat album in the top ten. Not just because it's Coldplay. A Rush of Blood to the Head is one of my favorite albums of all time. Perhaps it's my preference for awarding interesting material that doesn't work quite as well if there is nothing really outstanding. Still, I think quite a few great albums have come out this year. Perhaps I will do my own top-10 list as suggested. My blog has been silent too long. I don't ever know what to write about.

Hmmm been rambling for a long time now. I'm late

Sorry, I haven't heard any of these except half of the MF Doom album.

james.- hey dude- came across your blog.. and ya know i have to comment on this post. you hit on a lot of my favorites from 05' but left off a few of my favs as well....

M.I.A.'s "Arular" pretty much created a genra that may never be labeled nor replicated.

Matisyahu's "Live at Stubs" .... wow a white hasidic jew that can flow over incredible reggae jams?!

The Cribs' "New Fellas" simply because this album feels good and this british band may take over where the libertines left off.

And my personal favorite from 05'
Ryan Adams "Cold Roses" . I dont know how he managed to put out 3 quality albums in a year but this one by far consumes me the most.

Billy, I haven't heard any of those albums except for the Rilo Kiley one. I had forgotten about it. I liked it a lot, but I don't think it cracks the top ten for me.

Thanks, I've got some downloading homework now.