Here's a much needed update.

It's been a pretty busy and eventful week. I'm not really going to go into all that other than say I think I've finally got a job and a tangible purpose, to boot. (Although the purpose doesn't currently pay, that's another story. Purposes aren't always the most lucrative things. Now, exploitative child labor, on the other hand...) In addition to newfound things to spend my time doing, I also must say I ate the best sushi of my life last night at a place off of Geary called Kubota. (It was even better than that place in Manhattan, Becky. Sorry.) Yeah, Kubota cost the proverbial "arm and a leg" - $40 a person - but Christ, was it good.

Anyway, after sushi I saw Broken Social Scene with Feist last night at the Grand in San Francisco. Great, great show. Feist opened, and her stripped down sound was even more impressive live. On most of the songs it was her, a keyboard/flugelhorn (sp?) player, drummer, and multiinstrumentalist. About a third of the songs, she was by herself, just the electric guitar and her. And I have to say: she's also a pretty damn solid guitar player - which I always think is hot given the rarity of girls who can actually play a guitar (not just chunk away at a bunch of chords and require two other guitars in the band).

BSS was powerful, sincere, amazing...honestly one of the best shows I've ever seen.

Which is to say in spite of the crowd. Yes, they started moving around some halfway through the BSS show. But all in all, I'm sick of this indie-rock-too-cool-to-move-around or show enjoyment at concerts. It's a fucking CONCERT (or SHOW, whichever word you prefer), for crying out loud, OK? It's SUPPOSED to be fun. Yeah, jambands noodle on for hours and because of it, waterdown their music and artistic legitimacy,and sure, most of the people at the show are stoned, tripping, or some variation on the two. But those fans are actually MOVING to the music - albeit somewhat languidly and entirely ridiculously. And yet I think there's something to be said about not caring what other people think. That hippie couple with the white-people-dreadlocks, hula hoops gyrating around, obviously doesn't. So why should you, Mr. and Ms. Super Underground Too Cool For School Indie Rockers with complementing Chuck Taylor All-Stars and hair product and ubiquitous thrift store attire?

(For those of you who don't know me, I love indie rock and yest, I am guilty of two of those stereotypes. But seriously, come on indie kids! Get over yourselves!)

Now, if you'll excuse me, I have to go ration off my funds and eat ketchup and cracker sandwiches for the rest of the week. 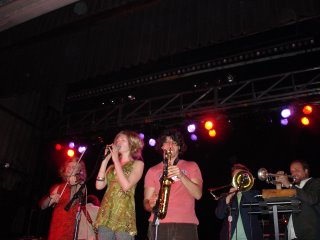 The only crappy picture I took of the show; the "No Cameras" disclaimer on the ticket stub was quite intimidating. 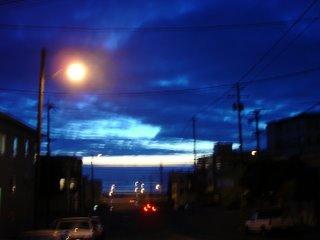 An equally crappy (and blurry this time too!) picture of what I see when I walk down the five blocks from the Geary #38 bus stop to my street.
at 2:09 PM

Finally! I've been totally jonesing for a James Yeh update :) I'm gonna guess your the Chuck Taylors and hair products guy right? And because you ragged on my post today I'm just gonna say that your "Be my friend at myspace" link comes off sounding desperate.

Maybe that's why no one's clicked on it.

Oh well, I'm leaving it up just for spite.

Oh, and you got it half right. Hair product and thrift store clothes were the correct answers.

I'm going to see Galactic this Saturday night and am sort of fearing the same thing, though I'm hoping with they're New Orleans Jazz influence more people are going to be up and dancing.

Galactic will have people moving around, although it'll be more like the rhythmically challenged hippie-moving more than anything else probably.

I was at the WSBF show a few years ago (it was at the bar there across from the atheletic center, right next to Hardees. Can't remember the name), and my cousin and I were trying to have a conversation during one band's show. A loud and drunken conversation, of course, but anyway we were yammering away and one guy who was in the band that had been playing when we got there that night (who was bobbing his head along much like the indie "no dancing" kids) turned around and asked us if we wouldn't mind shutting up.

I have hated indie musicians ever since.

Shows in Japan are notoriously low-energy. Seats are usually assigned, and people tend to sit in their seats during the concert. A friend of mine went to see the Beastie Boys. Everyone sat through the opening acts and just stood in front of their chairs when the Beasties came on!

No white people can dance, so you can't really expect much. But a lot of Indie shows in Europe have a lot of jumping up and down. Even at like Morissey shows. American crowds are too self-conscious, they're scared to get high/drunk. Except metal/jam band fans of course. We all came from Africa so get up and shake it everybody!!!

Trev, that reminds me of an experience I had Saturday night at the Amos Lee show at a bar called Slim's. A guy tapped my friend on the back, hard, and said, "You keep backing up." My friend looked at me with a quizzical look. "I think he wants you to stop backing up," I said. "Or maybe he wants you to keep backing it up, like in the Juvenile song." I did a butt-jiggling movement.

Thinking I was making fun of him (which I was), the guy asked, "You got a problem?"

"Turn around and shut up."

I defended my right to speak. "I can talk if I want to."

"Thanks for being so polite about it."

I've hated old guys with beards and glasses and wives ever since.

Jenn, you would think the Japanese would crazy excited for even terrible bands, screaming like Britney Spears fans. At least judging by those clips of Xtreme Challenge on cable TV.

Welsh, yes, they jump to Morrisey (it has drums), but would they jump up and down to stuff like old Iron and Wine?