how to be an indie rock star, like me

so i'm putting together a mix cd for a project i'm working on. the title is "how to be an indie rock star". it sounds exactly like the title: a how-to manual on being indie and cool, with all the ironies present in that statement.

basically anything that's in the indie rock/anti-everything idiom is welcome. however, i don't want to make an album of predictability. i want unexpected stuff that when you realize it, works.

and i'm even writing in cool indie all lower-case letters, just for the occasion. 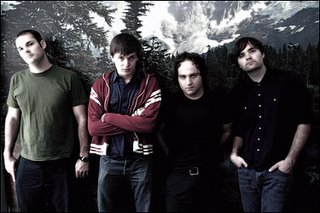 liking death cab for cutie=a dilemma for true hardcore underground indie rock fans. only solution: say you liked their old stuff, like when they were recording on the cassette tapes answering machines use.
at 12:53 AM

James, we need to talk. I'm beginning to get the feeling that our relationship is completely one sided. I support your writing, your music, hell, I'll support the whole James two thing. Let's name them all James two ala George Forman. You put the Jackass calender on the fridge and I didn't say a word. Who told you about WV? Me, that's who. Where's the give in this merry-go-round of a blogger relationship? I could see if you were getting like 30 comments/day that it might take you awhile to get back to me, but in all honosty it's looking like me and the doghouse guy are your last two visitors. If things don't change soon I'm taking my ball and going home.

James, I'm super mega alergic to Poison Ivy. I have found a magic remedy. It does take a bit of patience on the scratching part. Trust me, I felt itchy just reading your post...I'm alergic.

There is a soap called "Tecnu Poison Oak-n-Ivy" It can be found in most camping supply stores and occasionally you'll find a Wal-Mart that sells it. It comes in a white bottle with a green leafy label. Use it as directed, or you can use my directions: Stand in the tub, naked (easy, Nonny), pour some of the soap onto your rash and GENTLY rub for about a minute per rashy area. Turn the water on as HOT as you can stand, but only the faucet, not shower, not yet. Put your fingers under the water and then rub some more. The heat will open the pores and let the oils out a bit, keep putting your hand under the water. Too much water will wash the soap away. Then, rinse your entire body with a cool shower, let all the soap wash off, the cool will close the pores. Then, take a normal warm/hot shower. Don't use a luffa or scrubber or anything that will break open the rash, just use your bare hand and soap. When you're done, BLOT dry, don't rub with the towel.

To fend off the itch, I've found that Gold Bond Medicated powder is the best. The cream works well, too. Regular strength is fine. Baby gold bond is for pussies. Extra strength is overkill and will hurt like a mofo. The deal with GB is that it doesn't last as long as conventional itch creams, but it works better.

Good luck my friend!
Feel free to drop by the Hideout if you'd like. We play a game Thursdays I think you'll enjoy!

I've come to the conclusion that you should just listen to what you like and forget about being on the forefront of music and ahead of the crowd. I used to be into that "I remember when GreenDay was cool, now I wouldn't be caught dead at their concert" bullshit. But as you get older, fuck it.

I like Death Cab for Cutie, and Postal Service for that matter - why, cause it's good.

If you want some good Cure songs (I listened to them in the early 90's btw - see that's the dilemma you're talking about) I would recommend: Boy's don't Cry, Inbetween Days and Let's Go to Bed.

If you're listening to Nickleback on the other hand - well there's just no excuse for that.

Only in the Hideout

Why? Because work sucks.

What about Built to Spill, or Neutral milk hotel, or the Owls, or Dismemberment Plan? And does Modest Mouse count even though they've now been on MTV?

And I say don't fret about the hipness factor on one's indie cred when choosing music (though I was also into Death Cab before they were cool).

See James, the karma is already coming back to ya :)

Aww, James has a blog-stalker!

REM "Exhuming McCarthy" (or "Radio Free Europe", back when the partnership with IRS Records was fresh and new and not yet betrayed by Warner Brothers).

VU "Waiting For The Man"

Been listening to a lot of Bob Dylan lately myself, that's the most "indie" I can think of at this moment.

Oh. Suffragette City? It always sounded like "Sulfur Jet City" though neither one means anything to me. Indie Rock. Hmm I don't really know any. How about a song off the Rainer Maria "Long Knives Drawn" album?

Becky, I resent that statement. I'm an obsessive fan. Stalker implies that I follow him around (that's what cronies are for)and spy on him (you left the coffe pot on this morning). That would be impossible as I live on the opposite side of the country. And furthermore have no intentions of visiting San Francisco (until early next year). Please refrain from "labeling" me until you have all the facts.

I did write a biting-yet-witty retort to that, Nonny--but then I remembered that I'm a lover, not a fighter.

And hey, I just call it like I see it.

Yeah you are, Becky.

Kevin told me all about it. Rhar.

The Cure - "The Hanging Garden"

nothing more. nothing less.