So I've had an outbreak of poison ivy since my arrival on the West Coast. To say the least it's been annoying. In my search for a remedy, I've called my pharmacist sister, asked her doctor fiance, asked my cousin, googled it, even asked jeeves. Along the way I've think I may have found a decent solution (calamine and benedryll, hopefully). For the most part I think the websites were pretty informative and helpful. However, one site went further to pose this interesting possibility: "If poison ivy and a four-leaf clover were combined, you'd get a rash of good luck."

Yes, how clever! And if poison ivy and pollen were combined, you'd SCRATCH and SNIFF! And what about if a mix between honeysuckle and dandelion? You could pick the plant up and SUCK and BLOW!

I don't know about you, but the last thing I want to hear when I've got red pus-filled and itchy bumps all over my arms is levity concerning my tortured state.

On an entirely unrelated note, I met a Chinese guy named Achilles. How cool is that? Seriously, I think that's fucking cool. So what if he probably got taunted mercilessly as a kid. It's worth it now. Maybe I'll named my kid Agamemnon or Zeus or something. But I probably will chicken out and name him something less exotic and creative like James Two or Child or You. Anyway, Achilles, his Caucasian girlfriend, my cousin/roommate, and I went shopping on Clement at some Chinese grocery stores. Chinese grocery stores are basically places that make everything old and cheap. And they have the most random things as well. My favorite example of this was standing next to the register: a rack full of 2006 calendars. Typical things you'd expect to find calendars devoted to. San Francisco, Fast Cars, Golden Retrievers, jackasses. You know. 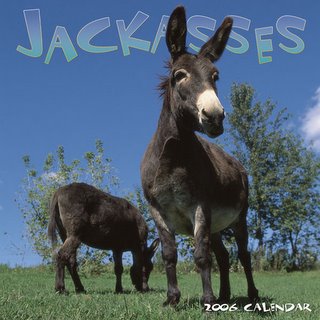 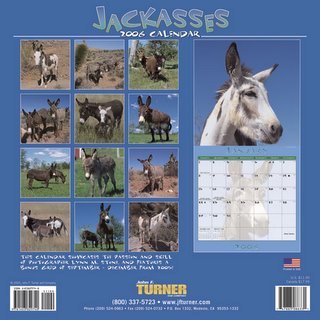 I don't know whose idea it was to devote an entire twelve months of a year to "showcase" (the term they used on the back of the calendar) these wonderful creatures, but whoever's it was, that person is a friggin' GENIUS.

LMAO at the "Jackass" calender. Why can't I come up with something that stupid. Stupid sells period.

I see you followed my advice re:word verifier.

Poison Ivy. Eek!! If I'm within 8 feet of the stuff it miraculously finds its way onto my skin. I was often accused of having flesh-eating bacterial infections when people saw my poison ivy rashes.