I'm an addict. Of computer games.

So I was entirely useless last weekend and into this week. I haven't finished my grad school applications, I haven't been working on writing, I haven't started training at Kaplan yet, and I haven't finished the short stories packet for my non-paying job as submissions reader with Hip Literary Publisher. I haven't even been blogging, my usual activity when I feel like being useless.

So, what have I done?

How uncool is that?

My friend, Tiffany, who is currently studying abroad in China complains every time I talk to her about the throngs of Chinese guys with glasses swarming in internet cafes and playing comupter games there. And now I've joined them. I guess, in a way, it feels good to belong somewhere. And you know what? Compared to those guys, I'm like a god of cool. A god of cool amongst the stereotypically nerdy and socially-inept, but a god nonetheless.

In my (and their) defense: The game is called Heroes of Might and Magic 4, or HMM4. (Nobody - I hope - calls it that, but it's easier for abbreviation's sake.) It's a turn-based strategy game, basically a war/adventure/civilization, balled into one. I think it's a year or more old, but I recently unearthed a copy of it in my cousin's cd book. I've been a fan of the series since HMM2, and I'm embarassed to say that I was so addicted to HMM2 and the subsequent HMM3, that I have stayed up all night playing, on numerous occasions. I'm an addictive personality, especially when it comes to video games for some reason. I remember the first night I had a Nintendo in my possession. The game was Teenage Mutant Ninja Turtles and I stayed up until eight in the morning trying to beat it. I don't think I beat it and worse yet, this was all done at my best friend at time Will Dillard's house, in his bedroom, as I tried not to wake him with my frentic button-pushing.

I've matured quite a bit since then, but my actions as of late really make me wonder if I'll ever truly "get over" video games. It's an addiction, seriously.

Some other memorable lowpoints of my "gaming" career:

-Because I didn't have the self-control not to play, having my girlfriend delete Counterstrike from my computer so I could study for my exams sophomore year of college.

-Last night, at the age of 23, playing HMM4 for seven hours non-stop. No bathroom, water, or anything breaks. I probably would have played for even longer, but my cousin's 6 am alarm went off in the other room and I didn't want him to find me in my CRT-glowing shame. 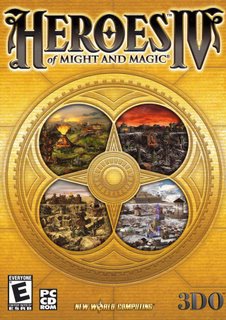 Don't judge a book by it's cover; this game is seriously engaging. In fact, all this talk and levity about my so-called problem makes me want to, you guessed it, play... right... now...


What closet embarassments do you have?
at 12:29 AM

I don't know if this will make you feel better or worse but I'm 36 and STILL addicted to gaming. I don't play on the computer but I have an xbox that is, at times, my entire world. Mostly RPG. I hate first person shooters though. God, try posting a little more frequently OK

Closet embaressment: I'm a 25 year old straight man and yet I watch "The Gilmore Girls" for the story.

Also, beware of continued play, you don't want to end up like this guy

One negative thing about blogspot vs. livejournal is the fact you can't make separate comments.

Hi there. Don't we all have secret closet embarrassments? Mine would probably have to be bouncing around blogland and picking random idiotic teenagers who can't spell (or won't) and have no clue what punctuation is. I'll rewrite their entire post, grammatically correct (I can't spell perfectly, myself, so...best I can) and post it back to them in their comments section. Ohhh, I'm evil. Heh.

HHHM4 sounds like, well, something a guy would like. Very much. I'm sorry. My mind's in the gutter today. I can truly identify with getting hooked on something so much. Chatting got me first, in 1997. Later it was trivia/chat. Then it was BBS. Now, it seems to be blogging. And sometimes, all of the above. It's all cool, man. All cool.

I'll be 28 soon and I have about $300 worth of MEGA BLOKS models in my back room. Half still in the box waiting to be assembled. I once went in toa KayBee and bought the ENTIRE collection of a special edition series (Nano Bloks).

If you have the time, come over to the Hideout and play our Thursday game!

Rated E for Everyone.

I used to collect action figures, which took up tons of room in my house until I sold them all this summer. Thousands of dollars spent. On action figures.

Until this summer, I also had about 100 anime posters. They were from when I was sixteen, but still...

I used to read videogame fanfiction. Like, all the time. When I came to Japan, before I knew anyone, I was so bored that I looked up some old fanfiction and read it again.

I did a lot of nude/lingerie modelling at one point. It's kindof humiliating now.

I'm a dedicated internet stalker. For no real reason at all, sometimes, I'll find a person and read their entire four years-long livejournal and look through all of their photo galleries.

When I'm taking a road trip, I listen to Britney Spears. A lot.

Hitman: Mega Bloks is pretty bad. I used to be really into Lego, but the fact that the word "mega" is combined with an intentional misspelling of "blocks" makes a MB obsession infinitely more embarassing. I think I can safely say most kids had Legos. Of course you probably didn't stick your MB's up your butt like I did my Legoes. Just kidding! I never did that. Although for some reason, I clearly remember an elementary school friend of mine's little brother sticking Wolverine's claws up his "peepeehole".

Action figures, Jenn? You're like Steve Carrell in The 40 Year-old Virgin. In a way, it's worse because you're a girl. :P

I had a one picture stint as a nude model, for an ex-girlfriend. I wonder if she still has the pic. I never got one from her, the selfish bitch. (Actually I'm not bitter, I just felt like I should call her a bitch since she's an ex.)

I wonder if "it" looks bigger than it really is in that picture. Or *gasp* smaller?

And Jen, you lose *all* indie street cred with that last statement. Seriously.

Speaking of computer games, there's a guy at Ingles who took today off because he's getting married...to a woman he met online at one of those "online games" that are so popular with the kids.

This guy is in his mid-forties at least, and the woman he's marrying lives in Washington State. All this pales in comparison to the following:

I noticed on the calendar that today's date was marked with "Min and Emmy's Wedding". For weeks, I thought it was just an average normal thing, like "Brad and Jen's wedding" that someone might write to remind themselves to go. Turns out it's this guy from work, and his "Jedi name" is something like Minerva Starsong or something like that. He even wrote it on a note he left for the main guy in Dairy about leaving early yesterday to get ready.

I'm just saying, when the path to the Dark Side you choose.....

I was looking for that game awhile ago in the stores but couldn't find it. I was on a similar kick a year or 2 ago with a game called "Disciples II", supposedly a Might & Magic clone.
As far as embarrassments go, I've seen several Steven Seagal & Jean Claude Van Damme movies. I don't particularly like them but it is a shameful thing I must admit. I wonder if that's something I could confess in church were I religious.

Glom, my response is on your blog. Four words: Steven Seagal's Asian Experience

Yeah, that is tragic tragic news.