1) First person seen nude. (A 30-something white guy, changing at the Richmond YMCA. And, of course, he was quite hairy.)
2) First crazy person seen on bus. (A middle-aged Asian woman, strutting around like she was on a runway and saying things like, "Spells! Spells! Abracadabra! Racism! Spells!")
3) First mail received. (Mom sending me my cell phone charger.)
4) First time--in my life, actually--asked, "What's your sign?" by a stranger. (A girl behind the counter at the Y. Actually I had talked to her yesterday too, so, technically, she's not a stranger.)
5) First illegal thing done. (Flashed bus transfer ticket that had expired 20 minutes earlier to uncaring bus driver, walked beyond his line of sight, did Tiger Woods-like fist pump, exclaimed "Yes!" I guess this isn't really illegal, per say, but it certainly wasn't right either.)

Also, I got tickets to Nickel Creek/Andrew Bird at the Warfield in early December. I guess that's a first too, but that's kind of a mundane thing. Pretty soon I'll be talking about other such non-events as my first West Coast lay or first "vigorous handy" received in the back of a late-night BART from a tranny dressed like a character from Scooby Doo. Um... 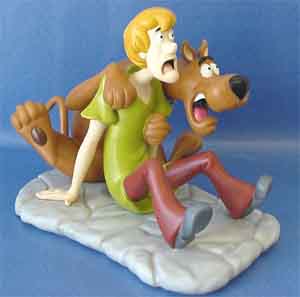 Scoob and Shag, on what suspiciously looks a whole lot like an air mattress.

I miss you madly, and i dedicated a song to you today on my radio show. (from My Morning Jacket's new album, it's good stuff) Hope you and SF are truly getting along famously, and congrats on being published!!!

Hey, great blog here. I have a blog dedicated to spamming the hell out of legit blogs by posting bullshit messages that look like the real thing, but are actually paid advertisements loaded with spam-alicious viruses and such!

Sorry, somebody had to call 'em on it...

I wonder what sort of tourist trap Haight-Asbury has become, just to cash in on the "sixties nostalgia".

technically, first ever illegal thing you did was gank baseball cards from Revco.