So I'm in San Francisco and I like it. No life-changing heartbreaks, conquests, or realizations yet. A recap of the week:

Oct. 11. Anderson, SC.
Spent my 23rd birthday doing yardwork for my dad and then going out to eat at a nice restaurant with my parents in downtown Anderson. After that, I went home and sat around doing pretty much nothing. Even more disturbing, I seemed to find some sort of happiness wallowing in my lack of festivities.

There seems to be a trend of diminishing significance to birthdays after 21. I can smoke cigarettes, drink, and buy pornography. I was looking forward to my 25th, so that I can rent a car, but, much to my chagrin, I recently discovered that I can rent a car right now; I just have to pay a little extra. So my 24th b-day will find me not answering phones calls from my family, neglecting to inform anyone outside the family of the date, and hermitting myself from leaving my apartment. And liking it.

Also, I received word that my short humor piece "What I Could Have Done to that Jerk who asked, 'Do You Know Karate?'...Had I known Karate" (based on an earlier blog entry) was accepted by yankeepotroast.org and they needed me to write a short bio. I wrote in a little over an hour, but it took me almost four days before I finally felt comfortable enough about it to send it off. It doesn't pay and I'm not sure if anyone reads it, but it's the first thing I've written that has been accepted for publication by people I don't personally know. I suppose it's a start. A meager one, but one, nonetheless.

Oct. 13, Clemson, SC.
A night of Beat poetry at 356 (a new artsy bar in Clemson, if such a thing is not an oxymoron). The crowd was great and the readers were as well. This was followed by a great party thrown by one of my best friends, Jud M. We had it all; cheap wine, cheap beer, and, my favorite, cheap women. About the women: of course, I jest. They weren't cheap at all. They were actually quite expensive.

During the night, I was feeling quite pic-happy: 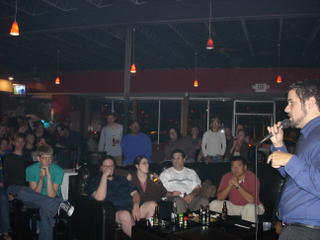 f. Simon Grant, organizer and MC of the Six Gallery Celebration, reading at 356. 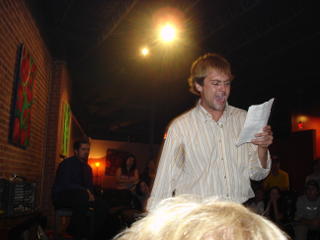 The moving and talented Sam Renken, cowboy poet from Nebraska, invoking the muse. 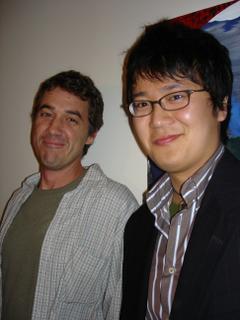 Keith Morris, one of my favorite professors and an excellent writer as well, makes an appearance at the party. 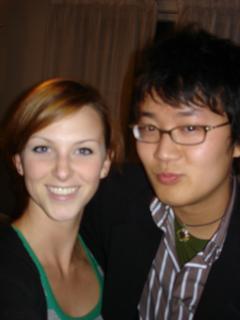 KT Zenger and I. And can you believe I met this beautiful girl off the facebook? 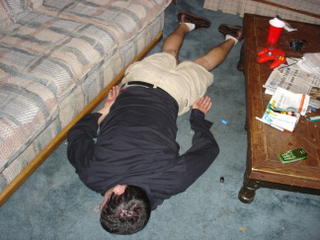 Reburn, Judson's floor, sometime between 4 and 5 am. Although you can't tell from the picture, there are countless obscenities scrawled all over his unconscious body.

Oct. 15, Anderson, SC>Greenville, SC>Washington, DC>San Francisco, CA.
Shipped out to the West Coast via a $100 one-way ticket from Independence Air. After spending a mention-worthy amount of time arranging my cds into my 100 absolute favorites, left the f-ing thing at the Greenville-Spartanburg airport. Indescribable panic and anger directed at myself. Freaking out, palms becoming sweaty, calling a bunch of customer service numbers. 4-1-1ed the number to GSP. Was connected by the operator to the airport gift shop. Laughed and asked to be transferred to lost and found. Case had been found! Called my mom to pick it up. Received lecture. My mom refusing to return it--"punishment" for my absent-mindedness.

Oct. 17, San Francisco, CA.
Staying at my cousin's apartment, which is located three blocks--walking distance!--from the Pacific. The weather here is, per usual, amazing. Daytime highs in the low 70's and nights in the low 60's. Went to City Lights bookstore in North Beach today and spent over three hours sampling everything from Eggers to Bukowski to lesser known authors like an early-twenty-something-looking guy named Davy from Ann Arbor who wrote a short story collection called "The Lone Surfer of Montana, Kansas". It got a great review from John Updike, if I remember correctly, but I wasn't terribly impressed with the guy (it kind of read like a wannabe Denis Johnson). I love Denis Johnson--Jesus' Son is one of my favorite short story collections--but I thought this Davy guy was either a) trying to rip Johnson off (and failing) or b) hadn't read him and, to use the common metaphor, inadvertantly reinvented the Denis Johnson wheel; although while Denis' wheel is smooth and almost effortless to roll, Davy's is block-like and cumbersome, and altogether, pretty much unnecessary. You may say I'm harsh, but it's just a defense mechanism, really. Oh well, point is I left with a little more self confidence in my own work and the latest from David Sedaris. On my way out, I saw two really cool photo opportunities, but alas, I forgot the batteries in my digital camera. Go figure.

*UPDATE (10/20/07):
Upon rereading this entry/review I would like to say, 2 years later, that while I do not remember whether Davy's short story collection was as bad as I claimed it to be, I have since seen his production Found Magazine and I think it's pretty awesome. I've also since seen him read from Found and he was great. In conclusion, I am an asshole who makes hasty judgments. Thank you, that is all.
at 11:30 PM

Congrats on the YPR publishing. They're a nice bunch over there, up until they start turning up their noses at you. Then it's downhill from there.

That said, I decided to try and mend fences. Maybe they'll give me a second chance.

Oh, and I envy you getting to San Fran. You must track down Dave Eggers. You *must*. I've always wanted to head to Greenwich Village myself

three things:
1) congrats on the publishing, it is the start of hopefully many great things.
2) I was disappointed that you made me pose for those pictures at the 356 after the reading and then neglected to grace your blog with them (although if you left them out to have room for Keith and Brian passed out on the floor, I completely understand)
3) I have your copy of Jesus' Son if you are looking for it.

Thanks Trev and Alden.

Call me a stickler, Trevor, but isn't Greenwich Village in New York?

And Alden, our pics together are just that, ours. To share them with the world of cyberspace would be to ruin them. But if that's what you want, I will post them up. (Sticks tongue out)

And yes, I was looking for Jesus' Son. I thought I was losing my mind. Maybe you would be kind enough to return it back to its home, when you're finished?

Shit, my horrible grasp of geography is exposed!

Anyway, have fun. But not too much. Because you know what they say about fun...and San Francisco...

Hey, sorry I missed your going away party. Looks like it was a blast and all. Hope everything continues to go well for you in San Fran.

Oh, also, I got a copy of the forum today...I thought maybe it would never come out, but I was wrong!

There's a decent chance I'll be living in SF come January. More on that later.

James-
If you stick your tongue out at me again (parenthetically or otherwise) you will never see your beloved book ever again. That is all.
-Alden
P.S. what's your address?

I gotta learn that karate shit too just to shut people up.
Wait for birthday 30. I hear car insurance rates drop significantly. Woooo!

I'll make sure to remember that, Alden.

omg. the dude in the green shirt is totally my brother!

I see the resemblance. Be sure to tell him he has terrible taste when it comes to choosing things to do on a Thursday night.

I found your blog through the YPR site. I laughed my ass off at the piece. Good piece! Great blog!