Thrills and spills of excitement, let me tell you!

The win in Hold 'em was in appropriately dramatic fashion: On the last hand everyone went all in and I ended up with three Jacks and a King high against three Jacks with a Queen high. Not too bad for someone whose mother had earlier called and asked, "James, you're not GAMBLING ARE YOU??" I have to admit I got a little bit of a rush from the whole experience--kind of like, now that I think of it, receiving your first French kiss. Your hands sweat and self-doubt shouts in your chest and all the while you're just trying to be calm and act like you know exactly what you're doing. And when you're done all you can think about is just, "Damn, I can't believe that happened. Well maybe I can. It couldn't have been all luck. Yeah, I'm the man."

Tomorrow I'm going to sleep in until 2 pm, play English major softball, and then call it a day. 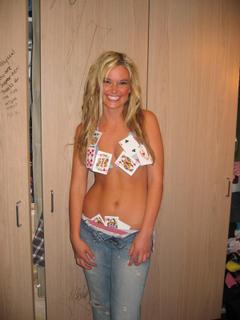 Is it just me or do those cards seem abnormally large? (Yeah, I know you're probably thinking, "There are cards?")
at 2:51 AM

Yeah, Yeh, we met. At Tiger Town. I don't go by "Rifka" here though. I was with Katie Keith and a few others if that jogs the memory; if not, it's not that big of a deal. You're one of very very few Clemsonites that update their blogs.

Too bad one doesn't get $35 after receiving that french kiss though. Not in my line of work anyway.

Rifka, I think I might be able to jog the memory better if I knew your real name.