Okay, I posted this yesterday, took it down, edited it some and changed the ending, and now I'm happy with it. For now. If you haven't read it yet, have at it.

(From 9/10)
Here's a short short story I've been working on recently. I'm not really sure what exactly is the criteria that categorizes something as a short story or a short short story. It really doesn't matter, at least not to me. Regardless of what it is, I read this story at the Pendleton Poetry Reading last night and it seemed to get a decent response considering stories are not necessarily built to please mass audiences at a reading when especially when juxtaposed against the quick satisfaction that a well-read and passionate poem elicts. (Although John Longo's short story about a man who cooks and eats his wife because he loves her so much was quite the crowd favorite last night.) Anyway what I mean to say is I hope you enjoy my story.

The last time I saw Rachael was a year ago, in the summer. Although her parents still lived in upstate South Carolina, like mine, and it would have saved her money to live at home and look for jobs modeling department store clothes, building up a portfolio from the ground up, she was living in Manhattan looking for something big-time. I’d talked to her a few times and although on the phone it seemed like she hadn’t really changed, I knew when she got back she would be different. It was impossible that she wouldn’t be. Moving away from South Carolina will do that to you.

It wasn’t until late July that she flew down, to visit her parents. I took off a couple days from the crap grocery store job I was working at the time so we could get together. Because there was nothing ever to do in our town at night I called her up to see if she wanted to go with me to a county fair about thirty minutes away. She said that she’d like to and then paused for a few seconds before asking if Skyler, her “friend from New York”, could come along. I noticed how she said the word quickly and immediately the worry about her inevitable change came into my mind again. I guess she noticed that I noticed because then she added, “It’s okay, Thomas. He’s gay.”

When I arrived at her apartment Rachael ran up to the car to greet me with a smile and a big hug but I noticed when we embraced she held her butt out like she was doing a stretch for her lower back. Before I could even really look at her or ask her how she was doing, she said, “And this is Skyler” and a tall but plain-looking black guy came up to shake my hand. He did it with a limp-wristed flair and then giggled.

She hadn’t told me he was black. It didn’t offend me, just surprised me. I guess it shouldn’t have; he was just a “friend” and I wasn’t white either—my dad was from China and my mom Taiwan—and she had gone as far to date me. Rachael wasn’t racist. Still I hoped that, deep down, she didn’t really like black guys. Not like that, at least.

But I couldn’t tell if she did or didn’t. So I did the next best thing and began to size Skyler up. What traits did I have an advantage over him? What ones did he have over me? I began to do a mental tally. He was taller but I was at least as good-looking, although my opinion of us might have been a tad biased. I didn’t know if he was smart or funny, but he was gay and he wore glasses, so he probably was both. And he was certainly better dressed. Standing next to him I felt self-conscious and unstylish. While I had on a loose-fitting T-shirt from the local university and cargo shorts—both of which I had had for years—Skyler was wearing a pastel-colored cowboy shirt, tight jeans, and boots to match. Seeing me eye his clothing jealously, he replied, “When in Rome,” and then giggled, again. “This ain’t Rome. Or Texas, cowboy,” I said under my breath and felt a wave of elation in my witticism. “You’d have to be gay to wear that outfit anyway,” Rachael said laughing. The comment seemed more directed to me than anyone else, and I wasn’t convinced. Before leaving, Rachael had to go back inside for a second and standing out there just Skyler and I, the feeling of awkward civility between two competing males fell upon us.

To break the silence I asked if he had a boyfriend.

On the way there Skyler talked about doing coke and then going shopping in SoHo and I tried my best to ignore him. It wasn’t hard to because I was busy trying to simultaneously drive and hold a bottle of wine between my legs. I passed the bottle to Rachael and after pausing several seconds to consider it, she took a swig. As my hand met hers to take back the bottle I imagined that we were touching each other to spite the bastard in the backseat. A public display of affection, breathing heavily with our lips touching in front of the world. But instead we sat in our respective seats completely apart, the distance between us as far apart as a phone conversation.

We weren’t dating anymore. We were just friends. Classic rock, the least trendy music of all, came on the radio and I cranked down the windows and turned it up.

When we got to the fairgrounds, bluegrass music was playing. Amongst the crowd of long-haired men in jean shorts and women in rebel flag tank tops, we stood out like the United Nations but did our best to unassumingly blend in and listen as four wild-eyed old men played onstage. Skyler mentioned to Rachael that they looked and sounded like hillbillies on crystal meth, but I thought the twang and plunk of the strings sounded kind of nice. The notes hung lonely in the humid air in a world separate from the one with buildings and asphalt. Sensing my disagreement Skyler remarked, “I haven’t seen so many toothless people since I went to a hockey game. Is there a trailer park discount?”

After about forty-five minutes the band took a break and we left to wander around the fairgrounds, our sandaled feet on pebbly dirt. I still felt a little amorous from the wine and the music but when I thought about making some sort of move, I saw Rachael teasing Skyler about how tight his jeans were or how white he really was and I gave up the thought. We stopped at a drink stand and without asking if she wanted any I bought Rachael and myself two huge souvenir cups of beer. I pretended not to hear Skyler’s request for bottled water.

Arriving at the center of the fairgrounds with our drinks in tow, a curious mixture of smells from the BBQ pit, funnel cakes, and petting zoo engulfed us. I wouldn’t call it a good or pleasant odor. Perhaps “earthy” is how I’d describe it: a little bit of stink and a little bit of dirt, but real and because of that, sort of good. My companions, however, did not agree with this assessment. Regarding the cornucopia of farm manure scents Skyler sarcastically remarked, “How quaint.” Rachael didn’t seem to mind the smell as much as the rotten and stinking feed that was the cause of it. She asked, “Aren’t there, like, laws against this sort of thing?”

Past the animal pens a red, white, and blue Ferris wheel jutted out of the skyline and we followed it, moving along slowly and carefully as loud unkempt children squawked feverishly next to us. I watched as the older ones brandished oversized orange mallets meant for bashing in some poor creature’s mechanical head and the younger ones carried pink cotton candy housed in bulbous plastic bags large enough to suffocate two, three full-fledged adults in.

The plastic mallets signaled our entrance into the gaming area of the fair and I began to walk slower to take it all in. The voices of barkers came in crackling through small PA speakers, advertising such talents as telling one’s future or guessing one’s age or weight—within five years or ten pounds. Grown men tossed quarters, spiraled footballs, and shot guns full of air to win plush toys as large as suitcases. To give as gifts. Wives and girlfriends of these men cheering them on and the men, like teenagers, cursing as they just miss knocking the third bottle off the wall or guessing the speed of their pitch. Afterward they would explain that the game was a gyp and the women would pout their lips. “But Pete, Pete-y honey, I want one.” Swearing some more, the men would hand the attendant another dollar bill, eye the target, and then alter their angles and stances accordingly. 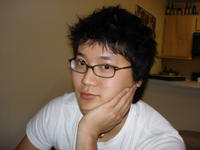 James lives in Anderson, South Carolina, with his parents. Along with this story, he is also the author of "Because I was the only Chinese-American at Clemson University majoring in English", an award-winning blog with a readership of more than six but less than ten. Currently he is being a townie and reminiscing about his college days, drinking at college bars and flirting with college girls.
at 1:19 AM

Good stuff, I liked it. I just wonder if there's more to it (not a "happy ending" ending, but something that says "this is the whole point here, folks."). But it's very good.

Your main character works at a grocery store? Hmm, wonder where you got that from.....;-) (just kidding)