So I did some work on a short story I'm working on called "How to Be an Indie Rock Star" today and decided to reward myself afterward by going to Blockbuster and renting some movies using their appropriately titled "Rewards" program. The program allows you to rent one new release and get one non-new release for free. Now this situation works very well for me because I'm indecisive as hell. Sometimes I want to laugh (comedy), sometimes cry (drama). Sometimes both (Forrest Gump). Sometimes neither (porn). One can never tell with me. I'm moody. Anyway, the point is if I'm only getting one movie, there's a lot of pressure to make sure it's "the right one". But if I'm getting two, there's none of that aforementioned pressure. So it was going to be an easy trip, right?

Going to the new release section, I quickly found Harold and Kumar Go to White Castle. It looked kind of sophomoric in the trailers but I had heard rave reviews from ethnic friends of mine, so I figured why not. Less than one minute into my trip and I already was half done. To balance the slight gamble I took with Harold and Kumar, I decided to get Cool Hand Luke, a classic starring Paul Newman that I've never seen before. Then I proceded to spend the next thirty minutes or so searching for it. It seems that Blockbuster doesn't carry it. I searched from comedy to drama to action--even trying foreign. No such luck. It was nowhere to be found. Second choice was Before Sunrise and, to my chagrin, it was not there either. And as if the store itself was mocking me, the credits section from the Toy Story special edition DVD was playing over and over on the TV directly above me. It must have looped thirty times. I finally grabbed a Phillip Seymour Hoffman movie from the Sundance award shelf and barely made it out with my sanity intact.

This episode at the Anderson Blockbuster reminds me of some of the other reasons I hate this chain:

1) Punch Drunk Love is found under "Comedy". If you've seen the movie then you know how much of a travesty this is. I assume it's there because it has Adam Sandler in it.

2) The Red Violin is found under "Foreign". Another outrage. I guess it's because some of the scenes take place in other countries but that's a pretty preposturous rationale considering the movie's mostly in English (and has subtitles permanently on in the parts where it isn't spoken), was made in Hollywood and has Samuel L. Jackson.

3) No The Office BBC or even The Office NBC. But practically an entire shelf devoted to house Dukes of Hazzard Season 1 and Season 2.

I guess that's Anderson for you. 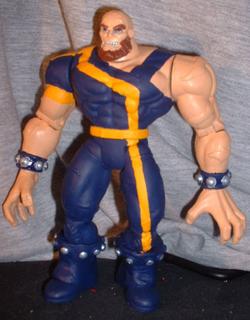 This picture has nothing to do with the blog other than it came up on page 3 under a Google images search of "blockbuster". Judging from the page where this pic was found, I think he's a comic book character or something.
at 12:11 AM

Blog is informative . Dont't stop. I'm sure you'd be interested in How to buy & sell everything, like chrysanthemum plant on interest free credit; pay whenever you want.

I don't know about Anderson, but the Clemson store has Cool Hand Luke and the BBC version of The Office. At least they did when I worked there, if someone hasn't already stolen them.

You're right Greg. The Clemson one is much better. But they still had The Red Violin and Punch Drunk Love in the offending categories.

Haha. Everyone knows the Clemson BB is the only one worth visiting.

The Red Violin is a Canadian film...so foreign is the appropriate category...and Punch Drunk Love is definitely more of a comedy than anything else...albeit a black comedy.

But there ain't no excuse not to carry Cool Hand Luke. Shut big blue down!

Fun Fact: Did you know Blockbuster categorizes its stores and stocks them differently? For example, Clemson is one of its "college stores," so we get more foreign and indie movies than most Blockbusters, and a huge comedy section. But the one I used to work at in Greenville on 291 is considered an "urban store," i.e. poor and black. So, Blockbuster patronizes its customers by stocking up on those terrible straight to DVD "urban comedies," most of which are produced by Viacom specifically for Blockbuster. Also, this means all the games are kept behind the counter to prevent theft.

In other words, Blockbuster's movie categorization is only a minor offense when you compare it to other hideously tasteless things they do.

Ron, I find Punch Drunk Love to be more of a drama, but I guess I can see your point. Does Canada really qualify as a foreign country? It's more like America, Junior.

Greg, you are a veritable cornucopia of Blockbuster lore. I wonder what kind of Blockbuster Anderson is. Rural, i.e. white and trashy? That would explain a lot about their selection...

The Anderson Blockbuster has to be better than the Seneca one. You could search all day and never find anything moderately intelligent. On the other hand, if you had an affinity for Steven Seagal/Chuck Norris/The Rock, Seneca is right up your alley.

I've been to the Clemson store a few times (mainly to buy stuff I couldn't find elsewhere, like 24 Hour Party People or I Heart Huckabees). It does have a lot of the stuff I'd watch if I went down to Clemson enough to justify a membership.