On Frequenting College Hangouts and Not Being in College

My stint at the parents' house is drawing to a close, and I'm starting to get a little excited for the West Coast...this is one possible explanation for why I'm updating at 3:30 A.M. on a Saturday (technically Sunday morning). For some reason, when I go to bed at 1 A.M. or earlier (tonight was, to continue the previous posts' theme of me being an old man, 11 P.M.), I can only sleep four hours consecutively. Afterwhich I wake up, mind active, racing and refreshed. But when I go to sleep around 3, 4, even 5 A.M., I can sleep til the cows come home--which apparently is no earlier than 1 P.M. I don't know if this is called insomnia exactly. More like annoying.

It's been a very eventful weekend, although I haven't been downtown once or had a single drink. This is an aberration to a somewhat disturbing trend lately--which is finding myself drinking downtown Clemson (sometimes even alone--the ultimate shame!) and self-deprecatingly calling myself a "townie". The worst thing about it is not that it's true, but that I derive some curious bit of pleasure from disclosing it. "James, what are you still doing here," asks someone I knew from undergrad, a statement, when said with the correct tone, actually means "Why are you still here?" or "I thought you were one of those big-talkers who always said they'd leave this small-shit town and go to California, Cal-i-fucking-for-nia." And when I tell them, "Being a townie," I can just see their faces drop a little, then reinflate, even beaming a little. The engineering and business majors are pitying me, but also, at the same time, judging themselves to be better than me. It's getting harder these days to make people feel better about themselves, and it's nice to do my part. The best thing is if it's to another English major or something in the humanities. I just love to tell those people exactly what they don't want to hear, which is that after four years and a liberal arts degree from Clemson, I have no job, no ability for responsibility, not even realistically attainable goals. All thanks to the presence of one beautiful word: "townie". No law school or grad school or job for this post-graduate failure! Just shooting pool in the back of Tiger Town or Peppino's and drinking pitchers of light beer!

Speaking of which, I took the GRE yesterday morning and did well enough to probably not have to take it again, although you won't be mistaking my score for some Asian wunderkid. Just an Asian "above-average".

The LSAT is due up in two weeks, and then I'm absolutely free. Go me.

I also started reading Vladimir Nabokov's Lolita. While the subject matter might be a bit questionable (the protagonist, a thirty-something year old man is obsessed with a girl who is fifteen or so), this much is true: Nabokov is an excellent constructor of sentences. I don't know how the rest of the book will turn out, but if it's like what I've read thus far, I'll be pretty happy. The book has, perhaps, the greatest first paragaph ever:

"Lolita, light of my life, fire of my loins. My sin, my soul. Lo-lee-ta: the top of the tongue taking a trip of three steps down the palette to tap, at three, on the teeth. Lo. Lee. Ta."

To loosely paraphrase Robert McKee's character in Adaptation: If that doesn't excite you, then you, my friend, don't know jack shit about excitement!

By the way, I just found out, thanks to CNN.com, that McKee is actually a real person and really runs the screenwriting seminar. 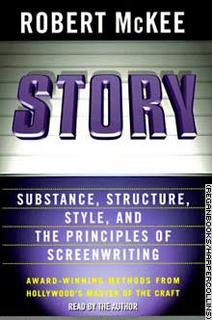 Hey, you have a great blog here! I'm definitely going to bookmark you!

Come and check it out if you get time :-)

I enjoyed your Blog.

My Site / Blog is about how you can get into file sharing with your PC.

It has everything you need to know about file sharing.

Uh, what's with all these fucking anonymous fuckers? Does this mean you are so famous that you get junk e-mail endlessly?


Because I want in on that action, baby!

Lolita is one of my favorite books of all time. If you want, I can send you a paper I wrote on Nabokov's negation of morality through the creation of pure aesthetic bliss in Lolita for a freshman English seminar.