Yeah, I heart NY. Wanna make sumthin of it?

For my second trip to the city (and my first without my parents and over the age of 21), I did some of the typical touristy stuff like visit the WTC Site, the Statue of Liberty, and Grand Central. I did some not-so touristy stuff like eating McDonald's and going to watch a movie ("Wedding Crashers" in Times Square). I had random, late-night conversations with random, late-night people (on buses and street corners, in hostels and bars).

The only event I feel like going into any detail about right now is my Times Square sensory overload the first night. My friend Kevin's self-described "partner" Becky was my guide. We ate sushi at a great little place that I don't remember the name of in Chelsea. From there we went to see a "Wedding Crashers". It was pretty good, but, given all the ridiculously positive reviews from seemingly everyone I know, it had to have been The Sting meets Casablanca meets Forrest Gump meets Citizen Kane to live up to it. But we still laughed and enjoyed the movie. However, I missed my bus to New Jersey (I had planned to stay with friends of my parents that night because it was free), so we went back to her place and watched Sex and the City season three. I'd never watched it before and was honestly a little curious, so I told her to put it in and if anyone ever asked about it, to lie and say that she made me watch it. It wasn't bad, but it wasn't that good either, in my opinion. We talked about writing, people we knew, and stuff in general. Then we made out. 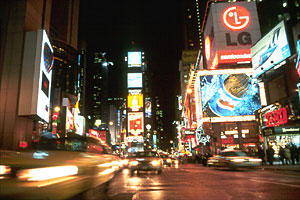 Sex and The City is one of those HBO shows that everyone loves, but I find only occasionally entertaining. Give me "Arrested Development" any day over that stuff.

I've learned that most guys have at least a mild curiosity about Sex and the City. I caught Kevin watching it with Krissy when I met up with them in Charleston for the Hootie concert.

But it was season SIX that we watched, not season three. I like the earlier seasons much better.

One more thing: I don't care what anyone says. Sarah Jessica Parker is not good-looking. She needs a nose job.

Agreed on SJP, though there is something charming about her. I call it "ugly girl with personality" syndrome. But Matt Broderick can have her.

Anyway, I've been to NYC one time, and I never felt more at home (even if the hotel we stayed at was in Jersey)

Well if Kevin was watching it, Becky, it must be good. That man has only eyes and ears for the best in film and television.

And Trev, I second your opinion. "Arrested Development" is much more entertaining.