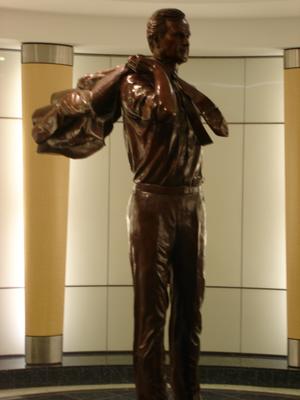 Found in the main terminal of George Bush Intercontinental Airport in Houston, TX, this action-pose depicts Bush Senior on a windy day, leather WWII flight jacket stiff and tie flapping due to an eternally blowing gust. Either that or the Cialis he took four hours ago had further side-effects than he orignally anticipated.

Notice how look on his face is youthful, yet also wise and determined. Presidental.

This statue really makes me want to fly, and not in some civilian passenger plane full of incontinent old men and crying babies, but in P-51 Mustang with a nekkid woman painted on the hull, high above the Pacific Rim hunting down Japs. 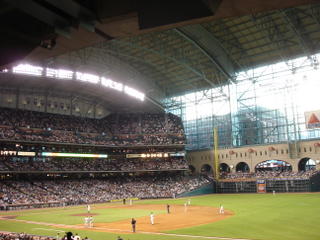 Minute Maid Park, Houston, TX, Home of the Houston Astros.
Despite the name (in my opinion, Tropicana's by far the finer orange juice), it was a really nice set-up--I especially liked how you could almost watch the game from the concession stands. You could see well from the--I believe it's called this--concourse. The view from the stands is incredibly good, probably from wherever you are. (I had a field box seat and it was quite close to the field.) It's air-conditioned too, which was good considering Houston's hot and humid climate, but bad because I'm a purist and, dammit, I like to feel the breeze blowing across my face when I squint out to watch the 3-2 count. Another complaint is the crowd in Houston isn't very exciting. Also there are a lot of children, which is good for family time and all that, but doesn't lead to much "colorful" commentary, if you know what I mean. 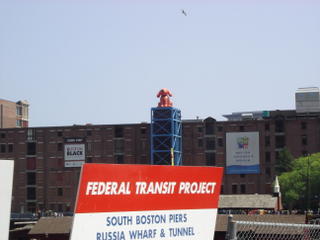 Boston, MA.
I used to love Clifford the Big Red Dog and all his books, movies, and readily available merchandise. I still do, but I used to, too. This monument to the colossal crimson canine was erected outside at the Children's Museum. It is at least seventy feet in length and twenty in girth. 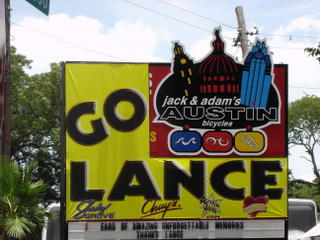 Austin, TX.
Two Interesting bits of gossip I picked up while keeping my ear to the streets in downtown Austin: 1) Lance is unpopular around town because, after last year's Tour de France victory when the city wanted to throw a celebration for him, he demanded to be paid an appearance fee. 2) He's a good tipper when it comes to purchasing Italian Ice snow cones, tipping $3 on $4 order. I guess he can afford to be when he's getting paid to party.
at 5:07 PM

I noticed no one has commented on your blog in the past few days and thought I would add some smart, concise, and humorous commentary to your latest entry.

Unfortunately, I could only make an ass of myself. My apologies.

http://www.acrossthenarrows.com/
we should go, road trip! think about it man