Feel like there's nothing ever good on TV anymore? That the best music died with Kurt Cobain? That George Lucas is making a mockery of his once-great franchise? That Hollywood and the music industry and cable TV, like all society, just doesn't understand you? Well, you're in luck. I, myself, at times have shared your feelings. This is why I've decided to delve into the world of current television, music, and film and come up with a couple things to show that things aren't all getting worse.

Great: TV: Nip/Tuck
Maybe I've been living under a rock, but I hadn't watched this show until recently (like last week recently). Simply put, the FX drama is really, really good. It's chock-full of sex, amorality, and shallow materialism--which I hate--but amidst all this Sodom and Gomarrah, the characters are wonderfully alive--wonderfully real. Real people with real desires and real complexities. This past weekend FX was airing a Nip/Tuck marathon and I watched three episodes in a row and when it was done, still wanted more, more, more. You gotta love these guys--especially Christian.

Good: Music: Belle and Sebastian Push Barman to Open Old Wounds
Their recently released 2-CD album is great--well, at least the first CD is. If you haven't heard of this eclectic indie rock/pop band from the UK, you should check them out, seriously. I'm not really sure how to describe them other than they'd be perfect on the soundtrack of a Nick Hornby adaptation or a Wes Anderson film. The album is a compilation of the band's first EP's off Jeepster and Matador Records, including the EP's Lazy Line Painter Jane and 3...6...9 Seconds of Light. Still, it's "discount priced"--I got the two CDs for only $13.99 new--and so damn good that one good CD is worth that much, in my opinion.

Film: Star Wars Episode III: Revenge of the Sith
Another nice surprise. I thought it was quite good, aside from the fact that George Lucas writes some of the most laugh-out loud dialogue for romance scenes. (One particularly disgusting moment when Natalie Portman says, "I miss when there was nothing but our love.")

Not as bad as it looks: Film: Mr. and Mrs. Smith
Now I know what you're going to say: "James, do we really need another spy movie?!" No, we do not. However, that said, it wasn't as bad as I'd expected it to be. Not terribly original, but semi-amusing. I don't know how many of you have seen it, but there were two scenes that, to me, seemed eerily coincidental to Robert Redford-Paul Newman movies: the poker scene in The Sting and the last stand scene in Butch Cassidy and the Sundance Kid.

This is a bit of a stretch, but for some reason, I made the connection. So cheer up, emo kid! It's not the end of the world--yet. 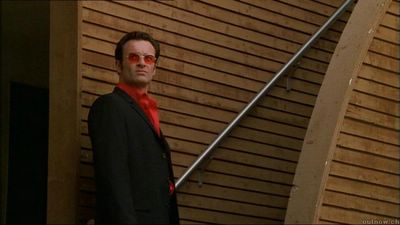 waddup james...it's jessi, just checking out ur site, ur still cute as can be. sounds wierd, but i was rearranging my room the other week and found yearbooks and old notebooks out the ass and had my own nostalgic look into my own time capsule - per se. well, hope ur humbled and blessed by what u find outside of sc - late

oops, guess i posted that under the wrong post........oh well, get over it

Other decent TV, from someone who hasn't had even basic access programming for 3 years:

The Sopranos
Arrested Development
and of course, The Office

And although this doesn't quite fall under the category of recent programming, Krzysztof Kieslowski made a series of ten short films for Polish television in the 80s that are stunning. Get your hands on a copy of The Decalogue at any price.

I have the B&S eps except "This Is A Modern Rock Song" already, so I avoided buying this, but I may have to get it anyway. My poseur friends would never forgive me.

Oh, and I concur with AD and The Office being good stuff on TV. Add to that MXC and you have Trevor's Viewing Habits for the 2004-2005 season. Why you would want to know what I watch, I don't know why.

Nip/Tuck is good, but I got tired of it into the second season. If that makes me a bad person, I hope to be forgiven in the next life.