Houston: From the outside a really, really big Columbia, SC 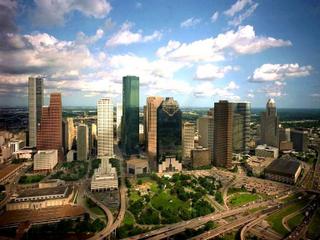 Okay, it's not that nice. But it does have a lot of parks.

My sister is moving, and I have been chosen to help her drive the 18-hour trip from Chapel Hill, NC to her new residence in Houston, TX. During the trip we got to pass through some of the most exciting places in the world. South Carolina. Georgia. Alabama. And Mississippi. But Louisiana wasn't half bad. And as for Alabama, if you look beyond the facade of racial prejudice and general intolerance, the birthplace of the Ku Klux Klan has some really pretty sunsets and landscapes.

Although I would have liked to have met up in Baton Rouge, LA with a long-lost friend from my high school Speech and Debate days, the trip out here was actually nice. My sis and I hadn't hung out in a goodly amount of time, and we got to catch up about a lot of things. Our parents, our lovelives, religion, music. You know, the good stuff. As for my friend, I hope she's not dead. Seriously. She doesn't carry a cell phone, and never called me back, even after several messages left on her home answering machine.

Arriving finally in Houston, I've discovered that the city my sister has moved to is basically one giant strip mall. I read that it is one of the world's largest cities without zoning laws (or something like that), and it shows. Everywhere you look it seems there's another small shopping center full of stores ranging from washaterias (Spanish for laundromats, I believe) to restaurants to Express to dollar stores. This isn't necessarily as bad as it seems, but it isn't exactly good either.

A couple other things I've noticed while here:

1) Melissa Etheridge is still popular around here. In SC (and probably the rest country, nay, world) there's absolutely no trace of her. After her one big album "Yes I am" which was followed by her coming out of the closet--wasn't that the surprise of the century?--she basically vanished. I think I remember reading that she had settled down and adopted a child. I haven't heard a song by her since my high school days, but in my few days here, I've already heard a cover band do one of her songs in a bar and then "Come to My Window" play twice on the local fm station.

3) Houston is full of good food. My three days in TX have reminded me of why I like big cities. The food. I don't care so much about being able to go see professional sports, nationally known music groups, or trendy bars. It's also nice to have an effecient mass transit system, cultural diversity and tolerance and all that, but man, the thing I love most about big cities is being able to eat, eat, eat. Some of the delicious things I've eaten here:

Food #1: Crawfish. For those of you who don't know what these are, these guys are like mini-lobsters. The ones I had were served cajun style at this hole-in-the-wall restaurant called the "Ragin Cajun". I have to admit I felt a little uneasy when I looked into the bucket full of crawfish and saw that they were completely intact and that I would have to look into their little beady eyes as I crack them in half and suck their insides out. Trivia question: The words "Geaux Cajuns" were on a sign in the restaurant. How do you pronounce it? (It took me three or four attempts before I figured it out. Yeah, I know that's pretty sad, but I'm not Creole. I'm fucking Chinese.)

On a related note, my sister, her fiance, and I traveled to an Asian market in Chinatown today and witnessed exactly how fresh the "fresh" seafood was. I won't give you the gory details because it wouldn't do the scene justice. I could stomach watching the fish thrown harshly onto the floor and then bludgeoned with a large plastic spoon-looking thing, but once the cleaver got involved I had to avert my eyes. The experience was bloody and altogether gruesome. I'm glad I live in America because I'd make a terrible Chinese fisherman (because all people outside of America are Chinese fishermen). I'd also be a lousy doctor. Man, I really hate the sight of blood.

Food #2: Taiwanese fried dough and salty dipping soup in a Chinatown strip mall. I feel sorry for all you non-Mandarin reading/speaking bloggers out there because you are going to miss out on a lot of great food. The whole pointing and saying "I want what they're having" is a little difficult and mostly embarrassing. My sister and her fiance were able to communicate some, but thankfully we had a waitress that understood and spoke some English so that we could break down ask her in English what everything was. We got these long brown fried dough things and dipped it in the "salty" (as opposed to "sweet") brown soup that also had cilantro and tofu. Needless to say it was a real symphony for my palette.

Food #3: Beef BBQ buffet from Joe's BBQ 45 mins away in BFE, TX. I've never been much of a fan of BBQ or for that matter all-you-care-to-eat places. I guess they remind me too much of where I grew up--rural South Carolina, full of second-class buffets (Ryan's and Quincy's come immediately to mind) populated by rednecks with dirty sauce-smeared faces and hands juxtaposed against eating utensils left clean, shiny, and untouched. At the table next to them are thirty-tops of black folks with screaming kids who leave the waitress exactly two dollars every time. (I mean us Chinese folks are cheap, but not that bad. We'll give at least 10% every time.)

But I have to admit Joe's was pretty damn good, and I came out feeling sickeningly full. The best moment of the night came when our waitress came by and asked if we needed a doggy bag for all the leftover bones. My sister and I were just discussing whether or not they'd let us do it because it was all-you-can-eat and all that. But there was no need, because apparently they'd been asked that question before. So now I have five pounds of giant beef bones for Kerouac when I get home. Really cool stuff, although I'm already preparing what I'm going to say at the airport when my bags pass through security. Maybe I'll buy a fake plastic skull and put it in with the rest of the bones and tell them I'm a serial killer and it's the skeleton of a young Texan child that I murdered while on holiday.

By the way, a daytrip to Austin, TX and an Astros game are due up tomorrow.

Other exciting travel news: I got several airplane tickets today, and I am quite pleased with where they are going and how much they cost. Roundtrip to NYC Aug 3-Aug 9 for $38 and a one-way to SF Aug 29 for $150 or so. Score.
at 10:53 PM

I'm sorry, did you say Alabama was the birthplace of the KKK? Sure, they need all the publicity they can get. But Tennessee can lay claim to that dubious honor (in case any KKK members are reading this, insert "honorable" for "dubious" and you'll have no reason to hunt me down).

Anyway, Houston sounds really great, but I've been prejudiced against anything Texan since 2000. Well, I think the Old 97's are Texan, but other than that...I could do without the Lone Star State

My bad. Alabama can only lay claim to being the "gayest state in America" according to Bruno from the Ali G show--not the birthplace of the KKK. Thanks for the correction, Mr. Seigler.

It's my pleasure to keep track of the history of racist organizations.

Coming next: an in-depth look at the rise of the Nazi party in Bavaria.