Boston: pretentious and homogenous, but surprisingly friendly at times 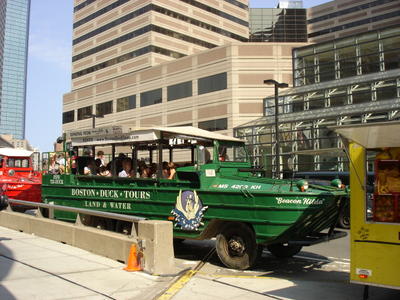 Because I've never a) been to Boston before, (b) stayed at a hostel, or (c) traveled on an airplane without being part of a group, I decided last week to do all of the above.

Here are a few quick highlights from my half-week spent in Boston.

1. After finding out my plane was going to be delayed over night, being offered a place to stay by female college students, not once, but twice, mind you, and on separate occasions. One even went so far as to add that "nothing freaky" would happen, as in, "You can stay with me. We have an extra bedroom. Nothing freaky." I must have been doing something right. The way I figure it, there are three reasons why they might possibly have invited me to stay with them. 1) They felt sorry for me, this completely harmless looking, cute in that sort of homeless puppy dog way guy. 2) They saw the charisma pratically dripping off my person and desired for my company, this well-traveled gent, stranded at the airport. Or 3) They saw me, this so ridiculously good-looking Asian man, and felt insatiably randy and wished nothing more in the world other than the opportunity to invite me over and then promptly seduce me.

I tend to go with the last reason.

2. Cultivating a faux-British accent gleaned from a Londoner whom I shared a room with in the hostel, then using it to speak to people in bars. When asked "Where do you think I'm from", a New Hampshire girl who was attractive save for her mossy teeth, responded "England?" Mission accomplished. 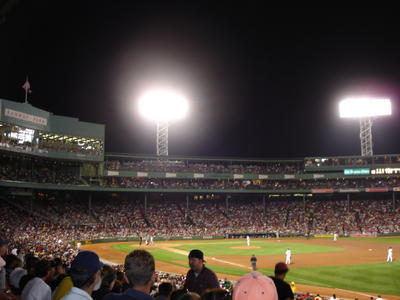 3. Seeing the Red Sox beat the Yankees 17-1 in a sold-out game at Fenway. Very friendly and knowledgable crowd, at least in Section 9 on the first base side where I was seated. (A 50-something businessman next to me said, "Man, that Bellhorn really sucks--he's barely above the Mendoza line" and we shared a laugh.) Sure there were fights that broke out twice in the right field bleachers, but I'm sure they were for good reasons.

4. Hanging out with cool Indian kids, a friend from high school, and a girl from the hostel until 6 am. Most of this time was spent at a hookah bar called Tantric, which was off Stuart Street in what I believe is the Theatre District. Now for all my not-so-culturally knowledgable readers out there, a hookah is a basically a nice, classy-looking water bong with multiple hoses for smoking out several people simultaneously. However, instead of pot being smoked out of it, this apparatus is instead used for smoking fine Indian flavored tobacco. And yes, it still gets you kind of high.

On a side note: this event was especially fun, primarily because I finally avoided the ridiculously homogenous bar scene on Boylston Street. Everyone at those bars was really tall and really white. Not that either of those things are entirely bad, (I for one am sort of tall--well in Chinatown I'm tall--and sort of white, as well) but that bar scene basically looked like the one at Tiger Town Tavern, and this was quite disappointing to me. (Nothing against Triple T's; it's one of the few bars I enjoy frequenting here.) That said, what was disappointing to me was that everyone seemed to have the same haircut (short), the same nose (prominently large), and the same clothes (polo shirt and khakis for guys, polo shirt with color up and flirty skirt for girls). The ultimate sign of the apocalypse was when I saw a 6'3" half Asian guy with a big nose, crew cut, and blue polo laughing like he was in a J. Crew magazine.

5. Feeling like indie rock royalty hanging out with Sam, Sri Lankan merch girl extraordinaire. One of the two airport invitations from random college girls (the only one I accepted, and not the "nothing freaky" one), Sam, after we found both our flights to be cancelled, took me around to some of the local indie rock clubs in Boston and even got me free drinks at one. Coincidentally enough, she was born in Gastonia, NC and knows a girl I know from Clemson, who I shared a class with in the 2nd grade. How wonderfully random. I got a free tour of Boston nightlife, a place to stay, and even a couple of free drinks. And all I had to do was sleep with her! (And by sleep with her, I mean sleep next to.)

Anyway, combined with the night before, my experience with Sam made me realize I really enjoy hanging out with "brown" people. (Indians, Sri Lankans, etc.) Stereotyping, I've learned, is OK if it is a complementary stereotype based on people you call "friends". So here's mine: Brown folks in the Boston area are incredible hosts/hostesses and have absolutely wonderful senses of humor. Cheers to Sam and brown people everywhere!

And some of the lowlights:

1. Having my driver's license ripped apart by douche-bag bouncers at bars on Boylston Street, one of Boston's busiest avenues. This ruined my night Thursday. But the miracle of Kwik-Glue, a Boston phonebook, and a spreading knife "borrowed" from the hostel's kitchen made me feel like MacGuyver or something putting the ID back together. How I did do it? You can use your imagination.

2. Enduring a conversation in the hostel awkwardly started with the question "Engineering?" by a strange little older guy. I rolled my eyes and shook my head and he then proceded to guess around thirty other potential subject matters I could have majored in. None of them English, of course, although he came sort of close on guess number #25 with Philosophy. The guy later claimed that he was an anthropologist, an occupation viewed as subversive by the US gov't he told me. Because of this and the fact that his mother was German, he said that an FBI agent visited him and told him that he had to report to Hamburg for detention. Needless to say, after listening to this, I smiled and nodded. Then avoided this guy like the plauge the rest of my time at the hostel.

3. Spending way too much for a scalped ticket to the Red Sox game. I won't tell you how much because, honestly, it's a little embarassing. But you only live once, right?

4. Being pushed off the sidewalk constantly. Not literally pushed off as in shoved off, but being forced to awkwardly contort myself out of the way of oncoming traffic constantly because the Bostonians walking toward me refused to budge even one centimeter left or right from the exact center of the sidewalk. I haven't been to all the cities of the world, but I've been to quite a few, and I don't think they do this kind of thing in other cities. This just proves the point that Boston might be the most pretentious city in America. Apparently, they're even too good to share their sidewalks.

5. Walking by Berklee College of Music everyday and feeling incredibly, inexplicably jealous of all those guitar-bag toting fuckers who are going to school there. They were snobby-looking and disheveled. Because of this, they had to be talented. Damn, sometimes I wish I was one of those guys.

Oh my God, James...I haven't talked to you in forever. I got off work at like 3:30 AM today and I couldn't sleep, so I've been milling through people's blogs. I know we were never exactly like friends-friends to begin with, but I just wanted to see what you are up to (besides your adventures in Boston). I hope you are doing well. :)

Wow I'm dumb sometimes...last post was from me! *Rachel*

Awesome posting. You're becoming quite a force on the blogging scene, James. And apparently in the Boston/hostel scene as well.

And Rachel, what's your SN again?

Awesome posting. You're becoming quite a force on the blogging scene, James. And apparently in the Boston/hostel scene as well.

(sorry, I ran out of original comments and thought I'd nick Kevin's)

Actually, seeing the Sox beat the Yanks seems to be a rarity this season. I've seen lemmings have better luck surviving the mass suicide attempt. Okay, maybe not, but the Sox are definitely schizo this year