We are intelligent beings, versed in mathematics. 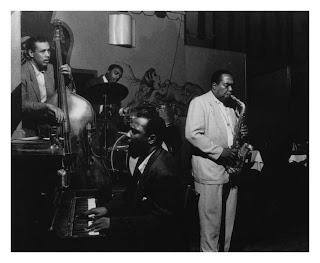 We are intelligent beings, versed in mathematics and capable of organizing a coherent sequence of sounds in time to produce a unified composition, called music, a form of art whose truth, craft, originality, and other indefinable properties bring a quality of transcendent delight, called beauty, to the mind and sense of the listener.

This is the message to those who are out there, at a distance only death can measure.

-Don DeLillo, quoting from a text aboard Voyager 1 and 2, in his stunning essay "Counterpoint: Three Movies, a Book, and an Old Photograph," originally published in Grand Street 73, Spring 2004, wherein he discusses, in characteristically crystalline prose, Glenn Gould, Thomas Bernhard, the various hatwear of Thelonious "Sphere" (his middle name, I learned) Monk, the film The Fast Runner, solitude, madness, the idea of "The North," strokes, the danger of having the numbers in your age add up to "13," and the image above.
at 5:35 PM

At Gifts-To-India.com you will have a bit tough time. Do not panic, because we have so many collections that you will wonder which one to pick and which one to leave.