Gigantic Monoliths and Some People Who Love Them

While on the rooftop of Clocktower Gallery in Soho last night, we came across this sight: 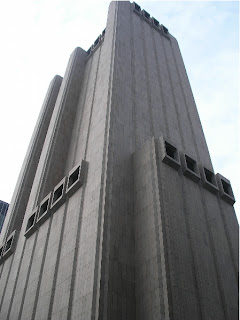 Was it something government owned, like a federal building or some kind of jail? We tried Google-mapping it to see if we could find out what this thing was, but the "street view" feature isn't available on iPhones. Later, I looked it up online. Turns out it's 33 Thomas, a building owned by AT&T that houses a bunch of wires and switches for telephone use. I suppose there's a kind of irony in there somewhere, but what really interests me is how it is apparently safe for up to two weeks after a nuclear fallout and that, according to the Wikipedia page, "its style has been generally praised, with the New York Times saying it is a rare building of its type in Manhattan that 'makes sense architecturally' and that it 'blends into its surroundings more gracefully' than any other skyscraper nearby."

Here is another view of the building, in the context of the neighboring skyline: 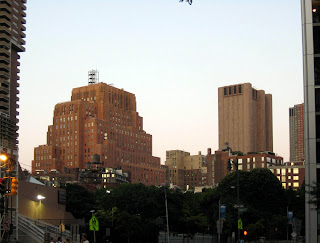 It's absurd (and, in that way, somewhat bleakly enjoyable) to come across this enormous windowless thing with four giant black rectangles at the top of it in the middle of soul-sucking downtown Manhattan. Wikipedia adds that it's an "extreme form of Brutalism," which makes sense.

I was reminded of this photograph taken by Dutch photographer Bas Princen, of a cooling plant in Dubai (also classified as Brutalism in a blog by Roger Ebert): 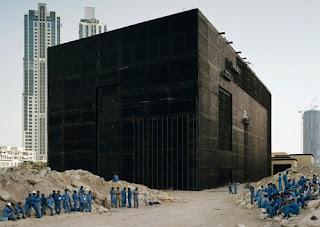 Bas Princen, Cooling Plant, Dubai.
I know, right? When I first encountered this image in a recent issue of Harper's, I honestly started laughing out loud. I couldn't help it. So many things to like and simultaneously find awful about this photo. Its obvious dehumanizing and posthumanness, somehow, paradoxically, also affirms us. Amazing.

Princen's work is architectural and striking, in its stark imagery but also in its clear "guiding intelligence," a great term which Lydia Davis used in an interview to describe the thing that makes art happen. The idea came out of an offered binary of ways of thinking about storytelling: "mechanical engines" or "bags of emotions," both of which, Davis noted, were flawed because of how they left out the artist's governing mind and intuition. "One wonderful thing about that guiding intelligence," she said, "is that it can absorb and assimilate scientific principles and bring them to bear on human psychology and emotion."

The clear guiding intelligence. My kind of beauty: vision. A vision of great feeling and smarts.
at 2:14 AM

Brutalism was the guiding intelligence for the great Jonathan Richman song "Government Center," too. Have you ever seen Boston's Govt. Center? Eeesh. It's no wonder the secretaries needed to feel better. That style is much better suited to house telephone wires and turbines.

What a great song, what a horrible building.

I have to say, as much as I'd hate to be housed in a building like that, there is a kind of real joy I get from knowing things like that exist. "Suggestions of a posthuman future," indeed.