something is happening here but you don't know what it is: a brief analysis of an interview with bob dylan; also bike experiment week 6 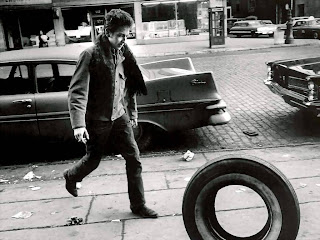 the title of this found jpeg: "rock-roll-bob-dylan"

thanks to vol. 1 brooklyn i just read this absolutely amazing bob dylan interview, originally published in playboy, in 1966, three months before blonde on blonde came out. in it, dylan is delightfully abstruse:

PLAYBOY: Mistake or not, what made you decide to go the rock-'n'-roll route?

DYLAN: Carelessness. I lost my one true love. I started drinking. The first thing I know, I'm in a card game. Then I'm in a crap game. I wake up in a pool hall. Then this big Mexican lady drags me off the table, takes me to Philadelphia. She leaves me alone in her house, and it burns down. I wind up in Phoenix. I get a job as a Chinaman. I start working in a dime store, and move in with a 13-year-old girl. Then this big Mexican lady from Philadelphia comes in and burns the house down. I go down to Dallas. I get a job as a "before" in a Charles Atlas "before and after" ad. I move in with a delivery boy who can cook fantastic chili and hot dogs. Then this 13-year-old girl from Phoenix comes and burns the house down. The delivery boy - he ain't so mild: He gives her the knife, and the next thing I know I'm in Omaha. It's so cold there, by this time I'm robbing my own bicycles and frying my own fish. I stumble onto some luck and get a job as a carburetor out at the hot-rod races every Thursday night. I move in with a high school teacher who also does a little plumbing on the side, who ain't much to look at, but who's built a special kind of refrigerator that can turn newspaper into lettuce. Everything's going good until that delivery boy shows up and tries to knife me. Needless to say, he burned the house down, and I hit the road. The first guy that picked me up asked me if I wanted to be a star. What could I say?

additional google research yielded this article, in new york magazine, entitled "the ten most incomprehensible bob dylan interviews of all time," an ungenerous piece with an interesting title, written by an apparently over-literal and narrow mind (or team of minds, the author is not credited). most of the links have since been removed, but some of the content is still there. what remains are mostly forgettable moments of dylan over the years being, basically, an unlikeable, willful ass. which i won't defend. and yet, clocking in at #1, implying the height of incomprehensibility, would you believe, is the playboy interview quoted above. would it not surprise you then, that the example quoted from that interview, what could be considered the very apex and pinnacle of incomprehensibility according to the unnamed author(s), is the same quote as above, about his path to amplified rock music?

now. come on, did we really want dylan to answer with some anecdote about how he always liked listening to rock music when he was a kid, his parents used to play the records all the time, i remember when Papa used to bring home records and play them for us and we'd all sit there on Papa's lap or whatever, listening to the beautiful sounds of rock? or something unconsidered and uninspired like, "oh, i don't know, i was just moved by the music?"

sorry if this runs pedantic (or worse, armchair-philosophic) but i'd like to counter. dylan's answer, while of course, not literally true, is fundamentally true, if you take into account how he is saying it. how he is saying it relates something that is even more deeply true than just a fact, which is something that only happened to bob dylan, the body. what dylan relates, with that so-called "incoherent" rant (in which he so gloriously references, "get[ting] a job as a Chinaman" and "mov[ing] in with a 13 year-old girl," among a myriad of other odd and wonderful things) suggests what happened not only to bob dylan, the body -- but what happened to bob dylan, the non-body as well. it's his experience filtered through his experience, is one way of saying it. by which i mean his opinions, beliefs, and imagination have shaped his reply, in such a way to evoke an infinitely more complex, creative, and elusive thing than just that something that is merely "coherent" -- it is, in short, an artistic act. because it's not purely about what happened but what is happening, there, in that room, on some beat-up couch across from the interviewer. what's happening as he breathes in the probably stale smell of cigarettes, thinks about the interviewer's question, then goes off to try to answer that question, even if the place where he goes off is totally absurd.

reading dylan's response, as one of my favorite writing teachers used to say, in a dramatic and slightly ridiculous though still highly intelligent voice, complete with faux-semi-British accent: "something happens."

annoying asian women accidentally hit by my bike when i carried it on my shoulder into subway: 1

annoying asian women accidentally hit by my bike in subway who then, along with non-asian boyfriends of annoying asian women, confronted me while i tried to get off the train, demanding i give them my phone number in case they wanted to sue me because they were so seriously injured due to aforementioned accidental hit: 1

annoying asian women accidentally hit by my bike in subway who then, in a conversation with me about the accident, used air-quotes when repeating the word "accident," somehow implying what i had done was intentional, who then told me to "calm down": 1

hellish, infuriating asian harpies i still, somehow, why did i do it, gave my real, actual phone number to: 1

oh james. don't you know by now to never give your number to infuriating, hellish asian harpies?