more news, all i do is news 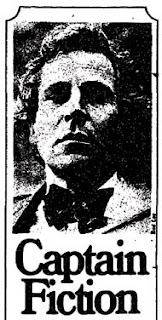 (i should say here how much i like gordon lish and many of the people who have studied under, been published by, etc. gordon lish, such as barry hannah, raymond carver, joy williams, ben marcus, sam lipsyte, the list goes on.)

-interviewed gary shteyngart. preview to be posted soon on the gigantic: a magazine of short prose and art site. it went better than i could have possibly expected. transcribing it, i felt "excited" and "pleased". i felt as if i could get gigs doing more interviews, in the future. i do not know if i still feel this way, but i still feel good

[what it originally pasted here was unpublishable. it just said there was "an html error" or something. this is my attempt at its recreation:] 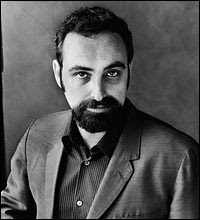 Gary Shteyngart
[NOVELIST]
"MOST THINGS WE PRODUCE ARE PHALLIC. LOOK AT THE SKYLINE. DO YOU LOOK AWAY EVERY TIME YOU SEE THE SKYLINE?"

-i also found a summer job

-"blew up" over gchat twice at my fellow editors. by which i mean "lost control of my gchat voice, volume level, and/or tone"

-apologized for "blowing up", felt like "an ass", worried if they would "give me a talking to", or "fire me", felt better about it after a while but still slightly afraid

-came into work yesterday, exhausted, and proceeded to get more exhausted.

i'm exhausted, i said to my boss.

this has been an exhausting last two weeks, i said to her.

did you fall in love? she asked me.

you're funny, i said to her. you're a funny person. 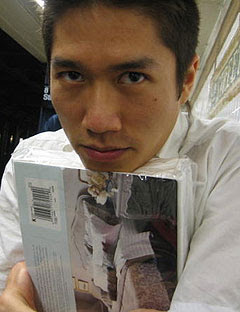 -[is this "bloggable"? i don't know. i wrote it and now i want to do something with it, immediate gratification:] i went with my roommate ben to see tao lin read at a loft down the street from me. there were two other readers: todd colby, a poet, and another guy whose name i didn't catch, who played guitar and sang and read from his novel. tao was funny and good and sad; he read a bunch of twitter entries in his usual tao way. my favorite entry was something like "i move my hand to my mouth to cough but sneeze instead". one girl in the audience laughed in a really loud and raspy way and at odd times and made everyone else feel uncomfortable. i don't think i liked her at first but after hearing her like this i think i liked her a lot more, and would have liked to talk to her or something, because i knew she was really uncomfortable, uncomfortable and probably hopeless at a lot of the things she liked and wanted to do. ("i understand," i could have told her, but not in those words, because you can't tell people things like that without seeming like an ass) i wanted to talk to her or something although i know i will probably never see her again. while tao was still reading, the girl with the loud laugh asked a girl with interesting, piled hair if she was his "girlfriend" (they had been seen hanging around each other earlier). the girl with the interesting hair shook her head. after the featured readers there was an open mic part where people read mostly love poems. one of our friends pretended she was ellen kennedy (tao had brought her books along to sell or give away, depending on the niceness of the person, or maybe just his mood, i don't know tao well enough to know) and read a poem by ellen kennedy called "i like to have sex" or something like that, i have the book and could check but i don't feel like going to go get it right now. the ellen kennedy reading went well and there was sincere laughter after some of the parts. three books were sold. one of the people who bought a book came up to my friend afterward and asked if she would sign it and she thought about it for a second and then did and when we were in the elevator she told us about it and i think we all laughed and felt good but eventually sad about it. and then i lost my phone and was in a bad mood the rest of the night and into the morning. you probably know the rest.
at 11:02 AM

you were a brat after you lost your phone

yes, i am aware of that. but think: i could have been worse.

also do you like how i did not mention you by name here, so as to protect your identity from whatever is you did?

You're afraid of what Lish would think? Weak, baby, weak.