I was reminded of the film Fitzcarraldo by Werner Hertzog, about an intrepid European businessman who seeks to build an operahouse in the middle of the Amazon jungle. Undeterred by hostile natives and environments, Fitzcarraldo carries on with his plan with a fanatical zeal. The image of the helicopter lifting the specially-made broiler in a net reminded me of the scene where Fitzcarraldo oversees the throng of natives he has employed, dragging his 32-ton steamboat over a mountain. The broiler scene was like a cheapened version of that -- but instead of opera, we're giving them shitty food.

Toward the end of the commercial, I found the "symphonic" music playing in the background as an oddly moving (and disquieting) extension of the director's desire to document a kind of "culinary culture" (these are his words) and "profound new human experience" (my words) -- a kind of culture "sharing" with the Other while, of course, ignoring the possibility that the Other might already have one, that is, a culture. At first I felt amused, then immensely sad. There's something tragic about this: this world we live in, where everyone has eaten a burger.

On a side note, although I have no additional inclination to eat a Whopper (or Big Mac, for that matter), my feelings toward Burger King, I think, have shifted slightly in the positive. 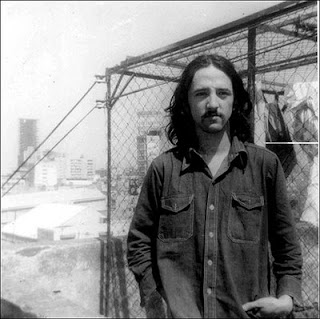 -I'm nearing the 500 page mark of The Savage Detectives by Chilean author Roberto Bolano. I have to say: it's probably the most beautiful and moving book I've ever read. I hope the ending doesn't disappoint me.

Eyeshot has a new piece of his up, a powerful, lyric essay entitled "The Beach". It's currently the only English translation for it. Next week's issue of The New Yorker will also feature freshly translated material of his as well, a short story, which, if it's anything like the last one published there ("Clara"), will be amazing.

Sometimes I wouldn’t even go out shopping because I was scared of coming back and finding her dead, but as the days went by my fears gradually faded, and I realized (or perhaps conveniently convinced myself) that Clara wasn’t going to take her life; she wasn’t going to throw herself off the balcony of her apartment—she wasn’t going to do anything.

Without thinking about it a lot, the Whopper Virgins thing strikes me as a very simple and total arrogance, for the very reasons of respecting (or loving) the unknowability/radical alterity of the Other versus trying to understand them by sharing, sharing as a way of assuming universality, etc.

Towards Burger King I feel a sort of immense helpless sadness or a feeling of "You utter utter bitches" that isn't really angry because it feels like they are impossible to change if they really went ahead with that.

Caveat: I just saw Synecdoche, New York for a second time and I am feeling very transcendent and philosophical. Also I had some free cake.

The weird thing about it is I think I found myself, in some ways, appreciating the innovation of the commercial into a kind of art object. (Also, I really liked the scene with the flying broiler.)

But yeah, I agree it's totally arrogant. There's a moment where the director or his assistant talks about how they're "sharing" cultures. But where does it show the footage of them wearing funny hats and trying to figure out how to hold Indigenous Food Product? They must have edited that footage out.

Caveat: I have not seen Synedoche once and have not eaten free cake.

Aside: I'll definitely check it out next week.

I hear you, but I think commercials have been art objects for a long time, so this didn't even feel innovative to me.

This is what happens when you have neither TV, nor a TV.