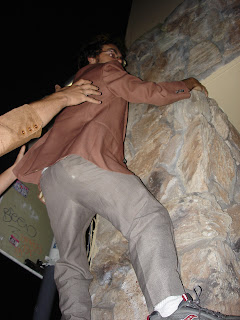 -my friend HJ is visiting for the month from SF. in his livejournal, my friends and i are discussed:

"I met some of James' friends including cool ass black girl [Serena??? I forgot her name], Van Young the jew, and Martin, whose tale is worth more details--he reminded me of Zachariah/Danley Dawgskull in the way he had 'soul power'."

(for those of you with short attention spans, yet are curious of HJ's blogging of his night with my crew, scroll down about halfway after you click on the link.)

and now a dump of reviews: 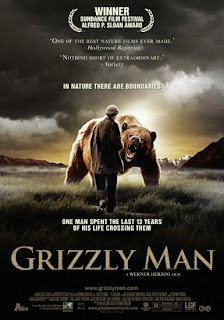 a werner hertog documentary about a documentary maker who lived with grizzly bears in alaska for 13 years. this documentary was funny, sad, heartfelt, and cute (it deals with animals). one of the most beautiful movies i've ever seen. plus, hertog's narrations are kind of darkly hilarious. "here is where i disagree with timothy [the main character]. i believe the common character of the universe is not harmony, but hostility, chaos and murder." uplifting stuff, really, actually, strangely. highly recommended viewing.

-chronicle of a death foretold, by gabriel garcia marquez

a novella about a man who everybody knew was going to die, yet died anyway. this book i didn't like so much the first time i read it (last summer), but this time, i was sort of blown away. especially by the surprising, enormously powerful ten page or so love story that just sort of comes out of nowhere in the story. the other ninety plus pages would be worth dealing with just for that, but luckily, they're good too.

-ted leo and the pharmacists, "shake the streets"

"indie pop punk" without any of the negative associations those three words might connote. smart, high-energy, super-hooky tunes with enough angst and falsettoes in the chorus to make a closet emo-kid like myself closet happy. 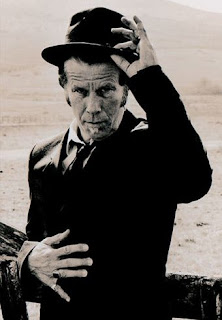 weird, creepy, and often downright frightening. waits growls, rambles, croons, and barks to smoky ballads, circus-type music, and pre-rock blues forms accompanied by anything from accordians to things that sound like bags of rocks. the lyrics evoke a rural apocalyptic mood imagery that is not only suffocating and amazing, but strangly humorous as well. I've been late to my Waits discovery, but I'm finally starting to get it now. It's taken me since freshman year when I somehow randomly downloaded "Cemetary Polka" off Morpheus (or maybe it was even the original Napster). As a gag I would turn up the volume, set the song on repeat, and then leave, the song of zombie shuffles and traditional Polish music spilling out of my dorm room and echoing down the halls of my residence hall.

And now I'm falling asleep to songs titled things like "Earth Died Screaming" or "Murder in the Red Barn".

stuff i thought was OK, but requires further listening before i will either deem it great or disappointing

this is sort of abrupt and probably more than a bit unsatisfying because i'm supposed to be updating the sf myopenbar (kick-ass party with free booze, bands, and boners 4/11/07 if you're in SF! click here) and reading a novella right now.
at 10:12 PM