What drinking every night in NY will get you

My second week in NY has found me transforming into quite the hipster lush, spending nearly every night drinking in places seeped with that elusive and hard-to-define effluvia known as "street cred". What's nice is that, as opposed to what I was doing when I first moved to San Francisco, these drinking sprees have found me accompanied by more than just a profound sense of melancholy -- I've actually made some friends. Unbelievable, I know. Contrary to popular belief, misanthropic young indie crumudgeons like myself actually can, on occasion, enjoy the company of others.

Included within the past week's adventures, but not limited to, have been:

-Catching the free Of Montreal show at McCarren Pool in Williamsburg, followed by the not free Protokoll show at Mercury Lounge

-Hanging out with hipster royalty like Becky, multi-talented goddess of free booze and editor of the NY myopenbar site.

-Becoming a regular -- three times in one week! -- at Heathers, a great dive in the East Village (3rd St, between Aves A and B), where the Tecates are two bucks before nine everyday and the ambiance is quiet enough to talk without shouting and loud enough to feel indie and New York. (There is no sign on the outside of the bar -- you have to be "in the know", a fact that gets mad street cred points [+25 points, if you're counting; ten less than buying your jeans at Goodwill, three thousand points more than buying your jeans at Old Navy]. The ultimate sign of cool: if you come on the right night [when Kari is working], you might even catch the patrons and bartenders combining brain power to solve Sunday Times crosswords.)

-Realizing that they weren't actually playing, that perhaps I had misinterpreted the flyer

-Saying "fuck it", "I didn't like Bloc Party that much anyway" followed by "let's dance"

-Losing the shirt off my back, literally

The shirt, a black, pinstriped shirt I bought from at H&M when I visited NY last summer, was my favorite collared shirt. I knew I shouldn't have worn two shirts on a night where I'd be working up a sweat, but I did it anyway, and just as expected, on the crowded dancefloor filled with punks, queers, indie sluts male and female, and everything I began to quickly overheat. So, knowing I had a t-shirt underneath, I took off Favorite Shirt and tucked it in between a large speaker and the stage. I checked up on it periodically. And then, right as I was ready to leave, I discovered that it was missing. I scoured various nooks and cranies for the next thirty minutes. Backstage, in between the speakers, beneath the stage. Not surprisingly I found a lot of trash. But no shirt. It was gone. Like my self-control. 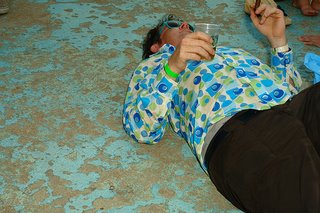 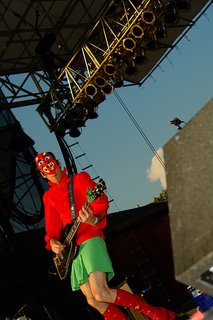 A giant rock 'n' roll elf queen, or: Kevin Barnes of Of Montreal

Photo credits: Rebecca Smeyne
at 10:32 AM

Hey, sorry I missed you in NYC this time around, but things were obviously pretty busy and I was gone a lot. We'll get together when you get back. Maybe go see Clay play and eat some ribs and drink some of that beer that nobody remembers the name of. Also, I stole your shirt.

i found it funny that you periodically went back to check on the shirt. i don't think it was stolen, i think it walked away on its own - looking for a more attentive torso.
you'll prolly get a neener-neener postcard from the adirondacks or something.

Sounds good, Robb. Quick question, though: which is the more common way people abbreviation people use for the city -- NY or NYC?

Wait! This post is too long! I have to come back and read it in a bit.