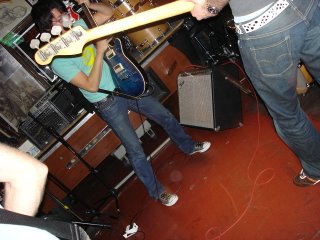 So last night was my first show with Hybrid Kid (thanks to everyone who came out.) We played at this bar called The Eagle Tavern in SoMa (South of Market), a borderline sketchy neighborhood in downtown San Francisco. A sign hanging inside the doorway of the bar proclaimed itself to be "The Home of the Wayward Brotherhood", which meant, basically, that it was a gay biker bar.

I had known this going in, having been told by Danny, our lead singer. Being someone who's accustomed to playing in redneck dive bars in upstate South Carolina where someone in the audience always yells for "Freebird", I found this sort of change of pace interesting. It turned out to be a pretty cool venue. Sure there were cartoon pictures of buff guys with chaps and handlebar mustaches and muscular penises. Yeah, the bartenders looked like Jesse James and spoke like David Sedaris. It turned out to be quite fun. A little strange at first (would using the word "queer" be inappropriate here?), but fun. And despite the picture on the website (where there's literally a ratio of 200:1 guys to girls), there were actually women there.

I got a bit nervous while we were playing our set (and started rushing tempo-wise), but as a whole I felt like we did pretty well. Afterwards we did the general hanging out and talking to people thing, even autographing two EP's for these two British kids who claimed to be in a rock band. They went so far as to offer to help book us gigs if we ever end up on the other side of the Atlantic. I don't ever take people like that seriously, but it was a nice gesture and a flattering one. The other three bandmembers left during the second band--they were that horrible, more on that later--but because I have a strange attraction to things bizarre, dangerous, and/or free, I stuck it out nearly the whole night. I had free drink tickets I had to use up.

Well the other bands were um, interesting. The band after us was a classic rock group whose name was a synonym for the word "conglomeration", but more death-metal sounding. To my surprise they sported a female rhythm guitarist/lead singer. I wanted to like them, honestly I did. The singer had chatted with me before our set, mentioning how we used the same chorus/echo effect pedal. She stood quite close to me, and in the light, wasn't entirely unattractive--despite her having what was pointed out to me by my friend Bonnie as a "massive camel toe" in her straight out of 1990 faded wash jeans. But then she sang.

How bad was it? Let me put it this way: by the second song, everyone moved into the other room, where the music wasn't as loud. Let me put it in another way: given the choice between listening to her or formatting spreadsheets, I would have rather been temping. I hate talking shit about people who try--bless their hearts!--but seriously, it was that bad.

During one particularly inspired song, Conglomeration's lead guitarist put down his guitar. For maracas. You know, those things that look like cock and balls and make a "chachacha" sound? Those. Amazingly enough from there on it was all downhill, and by set's end (nearly an hour and half, which was pretty rude of them, considering the four bands on the bill, it being a Thursday night, and the audible groans from the audience), I had been reduced to cowering behind the merch table, hoodie over ears, waiting for the discomfort to stop.

The third band was an all-female punk tribute group whose stageshow consisted basically of screaming obscenities and actions that would have made Howard Stern blush. Sporting pink KKK-looking masks, the bandmembers went by names such as "La Cuce", "Slickie Pricktease", and "Clam Dip". To add to the festivities several morbidly obese men gyrated onstage, sweaty, half-naked, and dressed in bondage. It was in the middle of their set when I got hit in the face with a plastic blow-up doll. It hurt a lot more than you would think it would. It was blown-up, I think, but its cover was plastic. It hit smack on my left glasses lens, but thankfully it didn't break or scratch them. Thank you, Anderson Mall Lenscrafters lab technicians.

The last band of the night was a Stiff Records tribute band whose lead singer bared a striking resemblence to Tom Petty. A friend of a friend told me that their bassplayer was probably a skin head, but that most likely of the "SHARP" variety. I asked him what that meant and he told me they were Skin Heads Against Racial Prejudice. This I found interesting, but let's be honest--it was fairly useless information, and as punk anthems from the 70s played on, I picked up my equipment and flagged a cab to take me to my bus stop and then home. 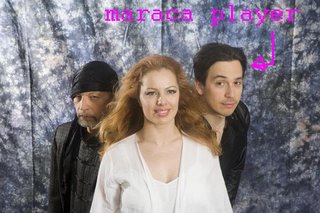 EDITOR'S UPDATE! (4/30/06): At the suggestion of Jenn, I've decided to try uploading some pics to, as she said, "add a whole realm of possibility to your blog. ;0." Jenn has an eye for some really interesting and great pictures and is fine, fine photoblogger. (Did I just really say "photoblogger"? And how would it be said? With emphasis on the second syllable? I hope so. Pho-TAH-blog-ger.)

Anyways, so click here for Gig pictures. It should take you to a page and then select "view pictures without signing in". For additional fun (and ease) then choose "view a slideshow". It's like you were there--but you weren't. Magical!
at 4:31 PM

I didn't read your post, I just saw a reference to an "Eagle Tavern."

We have an Eagle Pub/Tavern here. It's where Watson and Crick went to celebrate after discovering the double helix of DNA's structure.

I didn't read your comment, I just saw your new pic. Nice hat!

I thought I was the only one that had "Slickie Pricktease" picked out for a stagename. oh well, *sigh* I guess I'll have to change it now.

I didn't read your comment, but I googled "The Home of the Wayward Brotherhood" looking for an Asian southern baptist neo-revelation scripture reformist bible televangelist relocated to the west coast because they might redeem the sins of a reformed trivial pursuitist.

Am I right or am I right?

So long as you don't change it to "Colonel Cunning Linguist", Rifka--that one's mine.

I like this sentence structure, Light: "Help me Jesus--I love stir fry."

Thanks. I think it's a British Navy hat. Not sure how I came about wearing it, but I'm sure it's not the hat that makes the picture good, but the fact that there's some revealing side boob.

Oh yeah, can you take my name out of the link to my blog? I don't want it to show up when people google my name. Cheers.

Funny, Angel, that you should request favors from someone you call "gay".

Relax James, you're not 'gay'

Angel: the outrageously risque and revealing 'side boob' shot did make the picture something quite special for me.

The hat was cute, but I knew it was nothing more than a cute prop for the theme of the shoot. David Lachapelle would have put you on the cover of GQ - rveealing nipple and all.

You naughty wild crazy female thing - revealing yourself like that.

After the tenth Riesling I could almost see a nipple.

stir fry? was that a racial innuendo?

the side-boob revelation was purely accidental - the result of being given multiple shots of sambuca when i requested water instead.

Oh dude, I always thought that picture was of a girl ... but are you seriously wearing skinny denim?!?!!??!

Please tell me my eyes are just playing tricks on me.

Sorry to disappoint you, Angel, but yes--I am seriously wearing skinny denim.

*sigh* Oh, Angel, I don't know who you are. But didn't you get the memo? Boys in skinny pants are hot. Not to mention cool every civilized area of the globe!

Thank you, Jenn. Thank you.