Don't try to sneak on public transportation. Or I'll laugh at you. 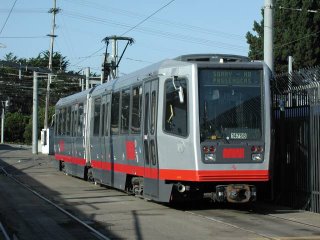 For example: I rode the N Judah train to work today. Because the N is a subway car that, in the outer sections of the city, travels aboveground, it's difficult to make sure everyone pays to board; people can just walk to one of the rear cars, press a button, and hop on. Well today there were, as I'm sure there are everyday, more than a few people who did just that--people who got on without paying--people who got on illegally. But today, unlike everyday, there were two officials checking passes. And as one of the ladies was explaining that instead of a getting a citation she could just pay the $1.50 fare now, I found myself cheering for the wrong team. I found myself cheering for The Man.

The officer explained to the woman what she could have done to avoid the citation, a fair move, and then issued the $150 fine. There was no mercy in Solomon's court today; he also made her pay the $1.50 fare. I watched in silence and a little voice inside of me jumped up and down and went "YES!"

I looked at my reflection in the window and saw a necktied, collar-shirted clone looking back at me. I smiled at the irony.
at 6:53 PM

that "necktied, collar-shirted clone" looking back at you, hey, dude, that's not irony, that's satire.

Once you slick your hair back with enough oil to power your Hummer SUV through the winter months, then it'll be irony.

But winter's over, Trevor--spring has sprung! I can tell because my eyes are itching. Well they would be, if I was still in South Carolina. Ah, California...

Light, satire is just irony maintained over an extended amount of time. Like a play, or a novel, or a war. The war in Iraq may be bad for soldiers, innocent children, and our international relations, but the potential for humorous writing material is through the roof! I don't know about you guys, but death and the imminent threat of violence always gives me the giggles. Still, I don't know if my tummy can take the apparent impending bombing campaign on Iran--I've already been laughing too much lately. Any more might cause some embarassing accidental bodily function, like peeing in my CK boxer-briefs or snorting like an idiot.

Wow, I just went all political on here. Sorry. I'll try to keep it from happening again.

"Satire is just irony maintained over an extended amount of time."

I do love that!

I've never actually thought about the difference between the two terms before (not even when I wrote that last comment - I was just trying to say something droll). I guess that the difference between satire and irony often depends on your point of view: I mean, I should think that, sometimes, satire means exactly what it says, doesn't it?

There's a great French film called Ridicule. Towards the end of the Enlightenment, just as things were getting a little degenerate, a young Frenchman enters the King's Court where loquacity and wit are de rigueur. He sets about learning all the felicitous tricks he can. He becomes a bit of a name in the corridors of face powder and has the ladies fluttering their fans deliriously, but the one form he fails to properly grasp is 'humour' (an English invention which directs one to make the most of a bad situation).

At the end of the film, the French revolution has cut in (is that a pun?) and this Frenchman is standing on the cliffs of Dover. His hat blows off the edge of the cliff and he cries out "My hat! I've lost my hat!" and the Englishman standing next to him says dryly. "At least you didn't lose your head."

And the Frenchman raises his head to the heavens and says:

As a writer you should see that film. You deserve it.