I had a great time last night, hanging out with my best friend--myself.

The night started off on the right foot when I got a ticket to the sold out Of Montreal show at Great American Music Hall (GAMH). I had called several times during the day (using different voices) asking if they were going to release any more tickets, but the response each time was an indifferent "I don't know. It won't be until 6:30 if at all." I didnt have anything better to do, so I decided to try it out. Ignoring the seven or so people lounging around (apparently hearing the same information I had heard over the phone), I walked up the box office to see if I could get lucky.

After purchasing my ticket (which because it wasn't a regular ticket, looked more something for a raffle drawing), I stood around for a second, dumbly reflecting on my good luck. This was a bad move.

"Did you just buy a ticket?" a girl asked.

Angrily the crowd murmured and then mob-rushed the box office window. Witnessing this, I did the best thing I could think of--I got the hell out of there. I went to go get some dinner.

After treating myself to sushi and sake, I returned to GAMH with a full belly and a hazy mind and proceeded to thoroughly enjoy the show. I could go into further detail saying things like the show was the best ever, that I hung out with the band and did all sorts of illegal drugs with them, that I was mobbed by twenty underage indie girls all demanding my services--but I won't. Not because it didn't happen and I don't want to lie about stuff like that, but because then you'd get really jealous and hate me.

I'm all about likability. 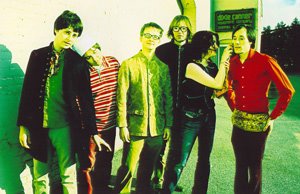 J-by, did you really hate my last comment so much that you erased it from your system???

B, look at that glaring typo in the--gasp--title!

By the way, I don't know what happened to your comment--seriously. There were others--okay, one other--comment that disappeared as well.

I'll just cut and paste it on there, so everyone will know what you meant to say.