The coolest-looking guy in the world (no, not me, but thank you)

Last night was spent again prowling the streets of San Francisco. I checked out the San Francisco Museum of Modern Art (SFMoma) for both the student rate and then the half-off Thursday night rate, which came out to a grand cost of $3.50 for a ticket. Just as I was fearing, the girl at the box office asked me if I was current student. "Yes!" I said, probably a bit too defensively. I was prepared to explain the discrepancy between the Clemson, South Carolina location of my ID with an excuse something like "I'm doing an internship" or, as was suggested to me by a lady at work, "I'm working on my Ph.D. thesis remotely." But the girl let me get in with nothing more than a skeptical look. Whew. The old James charm is still working.

The museum was pretty entertaining--there was a huge special exhibit of artist Chuck Close's self-portraits--but, honestly, I just don't "get" a lot of modern art. It's just not my thing. I found the ones I liked the best and had the most opinion about were the ones that had some description as to what the artist was doing. I think that says something, about me and about art. Either I require a literary impetus to understand things or modern art as a whole is entirely too elitist. Sure, education in the arts yields to a more nuanced and deeper appreciation for a particular work, but I think the best art can be understood and appreciated even without knowing all the backstory, why this is great, how this is a departure from yada-yada-yada, etc. Simply put, I don't like things that require learning how to see before seeing it.

And that's why I don't get artsy girls, in both senses of the word "get".

But here was the most exciting part of my MOMA visit--the free food. Apparently there was some sort of lecture about art-deco or something or another theater architecture and because of that, there was a reception with wine and orderves. I proceeded to down two glasses and eat more than my share of crackers, rich cheese, and tiny sandwiches.

The next stop was North Beach to visit my favorite spot for drinking alone, Vesuvio. And, as it never fails, I met interesting people at the bar. A couple was having an argument about Che Guevara and decided to ask me, random guy at the bar, on my opinion. Having seen Guevara postcards at the MOMA's gift shop just an hour or so earlier, I had a great answer. "I like him--because he always looks so cool in his pictures."

I mean, look at this motherfucker! 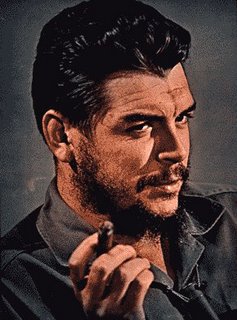 A cigar, cool hair, and a scowl. It doesn't get any cooler than that.

It seems I've discovered the easiest and best way to defuse any particular loaded question--bring in an unrelated but amusing fact that cannot be disputed. It's best if that fact shows unabashedly how shallow you really are. After that smile harmlessly.

"Both. I choose to live." [sheepish Larry David-esque grin and shrug]

See, with this method, it's actually pretty easy.

Anyways, long story short of the rest of the night they got me really drink with free shots and then I proceeded to hit on the waitress with a guy from Barcelona.

Me, talking with a stilted High School Spanish class accent to my newfound friend: "Ella es muy interesado en mi. Ella le gusta a me mucho--muchissimo. Pero ella es muy ocupado." (She is very interested in me. She likes me a lot--a lot a lot. She is just busy.)

At this, the waitress, who was within earshot the entire time, smiled tersely.

She so totally wants me.

Because I look like this guy when I rock out: 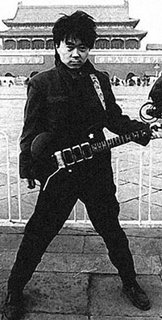 Thank you, Jimby. Now I have these awesome images and your Spanish to take on my run with me. Forget bonding with nature.

I like some "modern" art, but I'm picky about it. It seems that any frame which doesn't contain a naked body with a serpent and cherub is considered "modern" these days.

Anyway. As my mother would tell you: "Here's a straw: go suck it up!"

What kind of stuff did they have at the MOMA? Like, what particular kinds of the art did you like or not. Examples?

Good question, Jenn! Way to lead me into further discussion.

So as a whole, I think the museum is quite good. There is a lot of good stuff there, and it's definitely worth checking out if you're in the area (particularly if you go on one of the discounted days). I liked some of the special Chuck Close exhibit, my favorite being his most famous mammoth self-portrait (Big Self-Portrait I think it's called). I also liked this Degenerate Art piece by a German named George Grosz, this piece of sculpture by Marcel Duchamp that was a men's urinal turned sideways and titled Fountain, and Warhol's Liz Taylor--which was cool, but not his best.

The stuff I can't stand is where it's just a blank canvas or a line here and a spot here and it's up in a museum. Worse yet, pieces like that aren't even titled well. They're called like White Acrylic on Stretched Canvas. At least call it something more appropriate like My Response to Lack of Talent/Technique, or Sucker=You and This Gallery, or Could This Be Any More Pretentious?

j it's ev - and, being your self-appointed, part-time, remotely-located, overworked senior editor, it is "hors d'oeuvres" - i know i know i ruined these previously on-topic comments...

Yeah, I knew I didn't spell it right when I wrote it, but then I forgot all about it. I should have just said "snacks".

James, are you a corporate whore, yet? Stop making love to Che Guevara and tell us some more about your new spring wardrobe!

B, there's a big difference, and don't you forget it: One gets paid, the other just gets laid.

[obnoxiously laughs at own joke]

On a slightly related note, for the record, I'd just like to let you know that I could be a whore. I just don't want to.

I get propositions, like, all the time. And yes, from girls!

By the way I've spent nearly $350 in the last three days on "spring" wardrobe, food, drink, and music. I'd tell you more but I feel pretty ashamed at my utter lack of budgeting ability. God, I'm gonna be screwed when I get into the real world.

Already screwed or already in the real world?

*I don't want you to think I'm the type of friend who visits other people's blogs just to shower in their showers, use the last of their toilet paper, drink all their Pepsi, and then belch all over the place.

And why don't you post sometime, B?* I've got other things I'm supposed to be writing right now--like the Great Chinese-American Novel!

*Editor's note: I just checked your blog and, by golly, you posted. Damn you! This blog thing is too addicting!