I'm a new music addict insomniac who likes to share and blog. So it's only natural that I've decided to post some of the lovely brand-spanking new and hip music I've been listening to lately - all of which is available for the mere cost of internet connectivity.

The single most creative and hip musician of our generation, the artist known as Beck, has released a new CD called "Guerolito", remixes of the excellent 2004 album Guero. They're available for stream on his My Space site. Three or so of the fourteen tracks have already been released on the Limited Edition Guero - which I have. However, I loved those tracks and the new ones included are quite good too. Especially the remix of "Hell Yes", entitled "Ghettochip Malfunction", and the remix of "Go It Alone" called "Wish Coin".

His Official Website also has five or so new unreleased tracks up as well. The first track that comes up is so good I'd buy it for a dollar or two in a heartbeat.

I am told Sufjan Stevens, the indie rocker with the longest song titles ever (and the most pretentious sounding first name ever as well, pronounced SUE-fee-yan) also has Christmas tracks up on his website, although I have yet to visit it yet. He's highly recommended, too. MFA-creative writing program dropout turned underground indie rock hero with ambitious orchestral folk tunes with (no surprise) excellent lyrics and songwriting skills and mildly twinged-Christian themes.

Finally I've been listening to a lot of Of Montreal lately. I picked up their newest album "The Sunlandic Twins" the other day off Amazon. It's simply fantastic. Think Shins meets Beta Band. And from Athens (!). Easily my favorite new personal find. And here I was thinking only Spread Neck-following-generic-southern-jam-rock-crap came out of Athens. Definitely making a plan to see them in late January when they come to Frisco. And you know what? They have a giant selection of free downloads available as well: Of Montreal Audio Lounge

So Merry early Christmas, courtesy your friendly neighbor bloggerman and the internets. 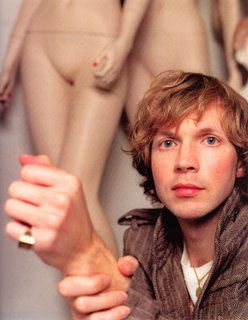 Beck, shown here measuring the width of his wrists. JPEG sent to me by Jenneral (link to her blog on the right sidebar).
at 1:15 AM

Really? Well blame Greg K. He's the one who told me.

Hiya. I just read your piece at The Morning News- it made me laugh. Usually, that sort of thing doesn't make me laugh (I've been through the 12 Step McSweeney's Rehab/I Love the 80s program), but because you wrote it about yourself, I was amused. The Morning News is a great site, and I hope to see more from you. Happy Holidays!