So I was in Tiger Town Friday night and overheard a random guy offering a friend of mine $40 to go up and kiss his buddy who was sitting at the bar. My friend declined and I joked saying that I would have done it for $40. The guy overheard me and then offered the same proposition, this time to me. I laughed and said I was joking. He raised it to $60 and even added that I only had to kiss his friend on the cheek.

Now before you judge what I'm doing, you have to consider a few key points:

1) We're in Clemson University in Clemson, SC, a college rated 19th in a recent poll for "traditional values"--values which include being suspicious of minorities, "foreigners", and homosexuals. Imagine how suspicious they would be if they say someone who, in their eyes, met all three categories. They'd be so angry at the sight of that guy that their heads would all explode or something.

2) Straight men accosted by men who they deem to be homosexuals can react in two unsavory ways. They could become angry, even violent. Or they could become secretly aroused, angry, then violent. Those are pretty much the only two options around here.

So taking these facts to mind, and the additional fact that I'm "not that kind of girl", I decided not to. I turned down the money and moved to a different, less awkward part of the bar.

Most of the friends I've related this encounter to have been like, "I would have done it--$60 is a lot of money" and "I would have done it--I'm a giant ho-bag", but the most sage comment came from my dear friend Brandon Bilinski. When I explained my reasoning to him he said, roughly: "$60 to give a kiss on the cheek is good, but $60 to get punched hard in the face as is not." Amen, dear Brandon, amen.

Oh yeah, this is what the would-be kissed looked like. 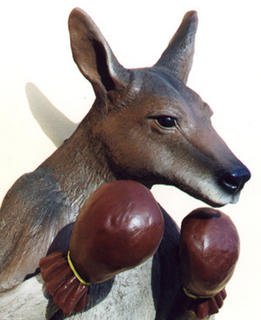 Something about him tells me he's not all that into kissy-poo.
at 11:51 AM

Guys are so homophobic. You wouldn't kiss a guy on the CHEEK for SIXTY BUCKS? Step it up, James.

Becky, I didn't want to maybe get PUNCHED in the face for SIXTY BUCKS.

Depends on what you mean by "cheek"...because I am so THERE if it's the good kind! I need the cash...

Sup James, this is skinny John from the bar fri night. (I recounted the face-melting performance at the DTD Acoustic Challenge) Picked up 'Grace' at Black Dog the other day. I'm enjoying it, thanks.

Glad to hear it, John. If you want any more singer-songwriter recommendations, feel free to shoot them this way. Makes me feel important, or something like that.

i would have taken the sixty bucks and walked up to the guy and said, "if you let me pretend to kiss you on the cheek i'll give you $40." Twenty dollars covers my tip most nights at the bar...