Why I Love South Carolina, Part 2

The last two days or so have been mostly wonderful. I got the email I've been waiting for for the last two weeks from Zoetrope: all-story (I haven't gotten the internship yet, but I'm getting a phone interview next week, which is hopefully a good sign). I bought plane tickets to Boston. I received my first payment ever for writing ($50 from Clemson's Semantics). I drove up to Greenville for the Gifthorse (my friend Alan's band) show and got really drunk on $12.

Then I went to the Huddle House in Easley. For those of you that aren't from SC, driving through Easley is like walking through a really bad strip mall. Even though it's by no means the worst town in state as far as tense race relations go (towns like Orangeburg and Mountain Rest come to mind), calling Easley "provincial" or "depressingly ugly and ignorant" would still be gross understatements. I guess I shouldn't have expected anything less. (It wasn't the food, just to clarify. The Texas Omelet I ordered was absolutely delicious, and we even got some complimentary sausage patties.) But after my meal, as I was walking out the door, a big redneck from across the restaurant yells, "Hey you know karate?"--playing, of course, to the all-too-predictable stereotype that all Asians know martial arts. Even though it is true--my mom, dad, and pharmacist sister are all 6th degree black belts or higher--I was just so outraged at his presumption that I did this to him: 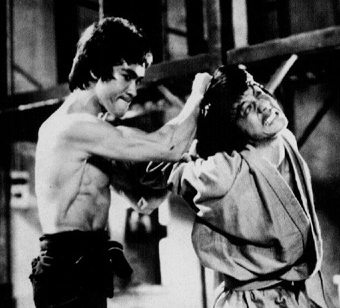 His friends were too dumbstruck by my cat-like reflexes and cobra-like lethalness to do anything, so they just stood there watching their friend continue getting his ass beat by yours truly. Afterwards, I deadpanned, "No. No, I don't," kicked him once more in the groin, and then calmly walked out the door.

This incident of ridiculously blatant racial profiling reminds me of several other recent ones, such as: (1) Having two maintenance workers hoot "Wahhhhh" noises at me out the open windows of their service van, while I was walking to a 9:45 am summer school class and (2) Having a deaf guy--a deaf guy for crying out loud!--make the same noise at me and then add a karate chop motion, while I was leaving TD's karaoke night last Tuesday. (That night I did have a Bruce Lee t-shirt on, so to give him the benefit of a doubt, when he was chopping and kicking, maybe he was referring to my shirt's graphic, not the shirt wearer's nationality.)

All I know is next time I'm at karaoke night and he sings horribly off-key and everybody in the crowd groans, instead of feeling bad for him and wondering whether he's "special" or not, I'm going to laugh my ass off and point at him, yelling "Dude, you totally suck! What are you, deaf or something?!"
at 8:57 PM

I have one question...do you have kung-fu grip?

(Silver star lands in back of neck, death instantly)

Turn that whole thing into a short story. That's hilarious. Seriously. I'd laugh out loud.

As soon as someone says, "turn that whole thing into a short story," it should quickly be stricken from the record of whole things that could be turned into short stories.